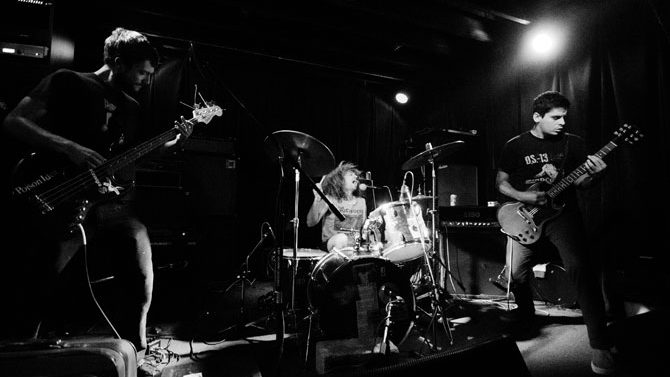 Jason Griffin is not worried about maintaining his singing voice. “I hate my voice,” he says. “The only thing I do is soak [my vocal chords] in beer.”

Approaching the 20-year mark of playing music in Athens and a veteran of punk bands such as No!, American Cheeseburger and Shaved Christ (with whom he still plays), Griffin recently founded Harsh Words with Gripe vets guitarist Tom Needham and bassist Brandon Goss. In the group, he plays drums and returns to singing for the first time since fronting Tres Kids, a band Griffin started when he moved to Athens in 1995.

Shouting over the familiar rapid assault of hardcore punk—raw, high-speed and at times dissonant, Harsh Words’ music might also be classified as power violence or grindcore—Griffin’s hollering lands somewhere between a growl and a bratty shriek. It’s enough to make any voice teacher cringe, but it’s a welcome sound to local punks, who have slim pickings to choose from in the local scene, especially as they get on in years.

Like any other genre, punk music has its tropes, among them angry young men who spend their days frustrated by service industry jobs, fueling their music with the agony of being broke and catering to the ungrateful moneyed. But the members of Harsh Words aged out of that demographic some time ago. Needham teaches math at UGA, and Goss is a student. Griffin maintains his ties to the service industry world by cooking at The Grit, where he’s been a staple for many years (no pun intended).

But if he’s frustrated, it doesn’t show. Tall and rocking an enormous pile of fluffy blond hair, he’s a warm dude with a gentle speaking voice. (It just so happens that he also likes to use that voice to kick off songs by screaming, “What the fuuuck!”)

Griffin is also known around town as a onetime regular of the house-show scene, particularly as a host during American Cheeseburger’s heyday in the mid-to-late aughts.

“I did house and warehouse shows, starting with Tres Kids, for 15 to 16 years,” he says. “I had a good run, but I got tired of destroying houses I lived in, and I haven’t done them in my own house for the last four years now. We still love to play houses, and I still love booking shows. I just don’t have a space anymore.”

That shift reflects an overall turnover in the punk community, with younger groups like Muuy Biien, which retains a youthful patience for trashed residences and a general lack of peace, taking up the D.I.Y. mantle in recent years. Griffin and his cohorts, meanwhile, have found new homes downtown, often organizing shows around touring acts, as they’ve done with Thursday’s show at Flicker for Finland’s Sokea Piste.

“If we played a house show, we’d be playing to different people than we’ll be playing to at Flicker,” says Michael Clancy, who plays alongside Griffin in Shaved Christ.

But centering shows on touring acts comes with its own set of problems: namely, raising enough money to make the out-of-towners’ trip worthwhile. Athens’ wealth of artist-friendly venues is a boon in that regard.

“Several venues, like Flicker, Go Bar and Caledonia, charge smaller production fees for bands, which is helpful when we need to get money for bands on tour,” Griffin says.

But regardless of the venue, the ethos remains the same.

“The songs are short, not sweet, and to the point. No filler,” Griffin says of his work with Harsh Words. The band’s debut album, Reptile Brain, supports that statement. The longest of its nine songs clocks in at 1:17, with most tracks coming in under a minute. So, yeah: short. And with titles like “Tears” and “Icy Resolve,” they’re certainly not sweet either.

What they are is fast, frenetic fun from three of Athens’ punk doyens. And once you’re in their thrall, it ceases to matter whether you’re thrashing around on the floor of the bandleader’s house or in a local bar. Griffin, Goss and Needham are mainstays of Athens punk, and they don’t concern themselves too much with the question of where it happens. To them, it’s pretty simple: “Hardcore is fast and fun to play.” Enough said.