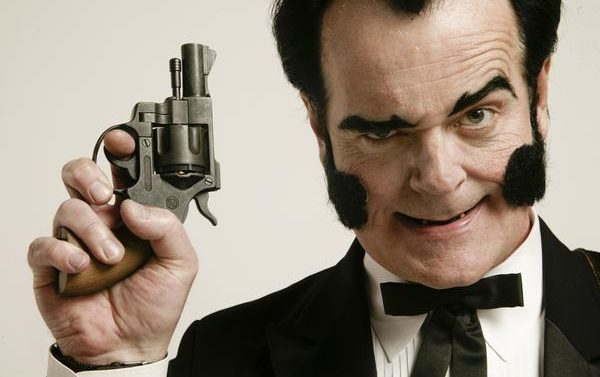 We all know someone like him. Maybe you’ve got a redneck uncle, or perhaps your coworker dates a gruff, loud-mouthed misogynist who makes you want to hide in the supply closet every time he makes an appearance. Or maybe you grew up down the road from Jesco White and had to deal with him and his kin tearing ass through your yard on four-wheelers.

The point is, we’ve all met an Unknown Hinson somewhere along the way. Hinson, who’s performing Halloween night at the Melting Point, is the alter ego of Charlotte, NC studio musician and music teacher Danny Baker, who also voices the character of Early Cuyler on Adult Swim’s animated series “Squidbillies.” The character sprung from Baker’s mind in the ’90s, after years of gigging around the Southeast. “I’ve entertained thousands of Unknown Hinsons, so it sort of rubbed off,” Baker once told No Depression.

Hinson, a cartoonish-looking hybrid of Nosferatu and Elvis, is the git-tar-playin’, party-liquor-drinkin’, self-proclaimed King of Country & Western Troubadours (he thinks “rawk” is straight from the pit of hell, though he may himself be a vampire). With him, Baker has filled a need we Southerners didn’t even know we had.

To listen to, say, a comedian from New England sending up those liquor-swilling, off-color-remark-making, opinion-shouting members of our community whom we both love and love to hate—well, that just doesn’t sit so well. Better to laugh at ourselves with one of our own. And so Hinson, who made his debut on the public access show “The Wild Wild South” in 1993 alongside a character named Rebel Helms, quickly found a cult following in the Southeast and beyond.

“TWWS” won Creative Loafing Charlotte’s “Best Public Access Show” four years running and helped launch Unknown Hinson’s recording career, garnering him fans beyond the Southeast when it was picked up by the satellite station Weird TV. When the show ended in the late ’90s, Hinson devoted himself to a heavy touring schedule, which he’s kept steady ever since.

Hinson’s redneck schtick belies Baker’s considerable talent as a musician. Silly, borderline-offensive lyrics like the ones in “Venus Bound” (“I’m buildin’ me a rocket ship/ To go where womerns don’t give no lip/ I’m blastin’ off/ Baby I’m Venus-bound”) are twangily intoned over fine country-western guitar playing. And Hinson’s insistence that rock and roll is the devil’s music? A show wouldn’t be complete without him shredding some face-melting riff and then shrugging it off with, “Any damn idiot can make that mess.”

If Baker didn’t have the songwriting chops, it’s hard to imagine he’d still be getting mileage out of the Hinson character. But his combination of musical skill, farce and true fondness for the culture he derides is the secret to his staying power. It’s why Hank Williams III has Hinson’s face tattooed on his arm. On some level, Baker-cum-Hinson is the real deal.

“It don’t [pander to Southern stereotypes], because people are like that down here,” Hinson once told Creative Loafing of his music. “Hell, I am. If someone comes on my land that shouldn’t be, I’m gonna let ’em know to get the hell off. If I have to show ’em my gun, I’ll do it. And that’s just part of being a normal Southerner, I think.”

Baker’s insistence on staying in character is a large part of the charm, too. There’s never a moment when he stops to comment on what he’s trying to say. Even on the phone with a female journalist, he’ll kick off a conversation with a “You got a real sexy phone voice, baby,” a pure womern-loving Hinson move if there ever was one. But the strange truth is, Hinson has a knack for making even harassment seem absurd. (He even claims his more cringe-worthy tunes about wife-beating have been used as therapy tools in battered women’s shelters, because they reveal how ridiculous abusers actually are.)

The South has been plagued for too long by the outsize influence of the armchair bigot, and many a serious effort has been made to defang the specter of that ignorant hater. Instead, perhaps what we needed all along was to give it a literal pair of fangs, an authentic Southern accent and a microphone.

Danny Baker’s ridiculous vampire hillbilly shows that Southern stereotype, and the people who live it, for what they are—a silly, one-note tune. Hinson’s endurance is proof that the majority of Southerners are in on the joke, and that they’re laughing right along with him.