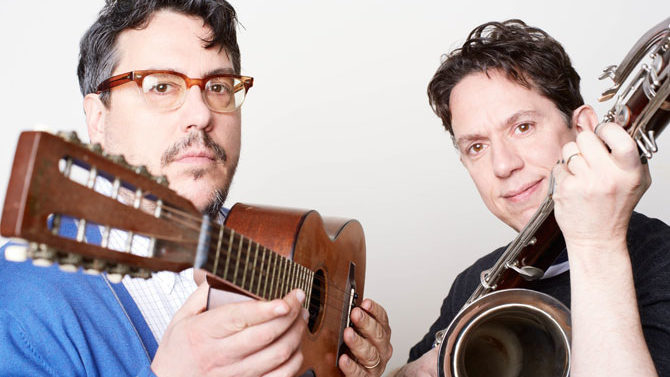 Sixteen albums and nearly 30 years into their colorful musical career as They Might Be Giants, John Flansburgh and John Linnell are continually amazed by the support and interest of fans, new and old.

“The surprise for us this year was that we could sell tickets and expand the tour,” Linnell says. “We were surprised at how spectacularly successful shows [have been], especially considering how there’s been a real drop in concert sales over the last decade or so. It’s much harder to promote and play a tour now than in the old days, but it did seem like if we booked it, they would come. And we don’t take that for granted.”

TMBG’s 1988 album, Lincoln, pushed TMBG into high-profile alternative rock territory with energetic songs like “Ana Ng” and the herky-jerky “They’ll Need a Crane.” Flood followed in ’89 with two chart-topping hits, “Birdhouse in Your Soul” and “Istanbul (Not Constantinople),” the latter of which was an elegantly hectic rendition of the 1950s swing tune.

Through the 1990s and 2000s, Linnell and Flansburgh have experimented with various themes, formats and lineups, from the esoteric Apollo 18 album (featuring the multiple track suite “Fingertips”) to cartoons (“Tiny Toon Adventures”) and film soundtracks (Mighty Morphin Power Rangers).

The band’s core zaniness and musical drive rarely got off track along the way and is demonstrated in spades on TMBG’s most recent works, 2011’s Join Us and its latest, a 25-song collection released this spring called Nanobots.

“We’ve never had a plan to radically remake ourselves, so in a sense, we’ve been refining this thing for three decades now,” Linnell says. “We’re not one of those bands who comes up with a new look for ourselves. We haven’t switched over to a dance music thing. I like bands who can come out and say, ‘Now we’ll only be doing Broadway show tunes,’ or whatever, but that’s not us.

“It’s not like we broke up and reformed,” he adds. “There’s always a new album’s worth of material when we go on tour, and there’s always new visual stuff, but… nothing has fundamentally changed. Every year, we think we’re doing our best show [ever]. We’re trying to be as fun as we always have been.”

Linnell and Flansburgh will hit Athens this week with the backing band they’ve had for years: Dan Miller on guitar, Danny Weinkauf on bass and Marty Beller on drums. TMBG will present a multimedia show featuring plenty of selections from Nanobots, as well as fan favorites sprinkled throughout. They’ll likely have a few oversized bass drums and paranoid sock puppets on hand, too.

“We feel very comfortable with these guys,” Linnell says of his longtime musical crew. “We personally like each other, which helps, because we have to live with each other on a bus. We have very intense conversations with each other about things totally unrelated to the band or the stage show.”

The band will stay busy for the rest of 2013, traveling in the UK and Europe, but then plans to take most of 2014 off from the road to brainstorm on new artistic concepts and compositions. Still, Linnell says the touring lifestyle is what he enjoys the most.

“We do still enjoy this,” he says. “We’re old guys, and touring can be really hard for us, physically and mentally, but I won’t take it for granted. There’s something terrific about it. We know plenty of musicians who aspire to do this thing we’re doing… Even if people didn’t show up, we’d probably still write and play just for the fun of it. It almost seems miraculous that we get to do this and make a living at it. It seems like an amazing gift.”