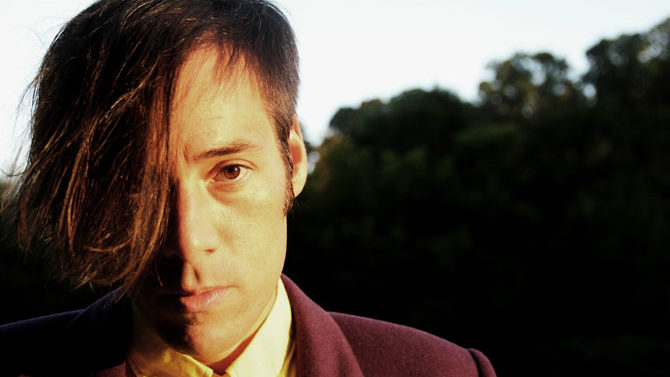 Kevin Barnes is a quiet man. After a show, he likes to withdraw into a corner of the room, while his more boisterous bandmates assume the center of attention. He is tall and thin and muscled just enough to suggest that he has a gym membership somewhere in Athens. For the past few years, he’s been wearing an asymmetrical haircut and looks scarcely aged since those first of Montreal records, which were released on Kindercore and Bar/None records over 17 years ago.

In conversation, Barnes is soft-spoken and so Midwestern-nice (he’s from Ohio) that you imagine if he got mad he might punch you in the face with a hug. But to see Kevin Barnes offstage is to momentarily forget his larger-than-life spectacle onstage as of Montreal.

After all, this is the man who developed the persona of Georgie Fruit, a black, cross-dressing funk frontman who twice had a sex change, transforming from man to woman and back to man again. Barnes is infamous for smashing his guitar at the end of live shows (luckily, he has a Gibson sponsorship) and once performed entirely naked (link NSFW) at Art Bar in Las Vegas. In 2010, he had players dress as prepubescent boys and Catholic priests before erecting a giant crucifix and “killing himself” onstage.

But of Montreal’s latest album is a sea change, closer to Barnes’ introverted post-show personality than to the flamboyant skylarking that happens on stage. Scaling back most of the excesses that occasionally made False Priest and Paralytic Stalks sound like workouts, Lousy with Sylvianbriar is a stripped-down, back-to-basics affair, calling to mind of Montreal’s earliest work recorded on 8-track tape.

Best of all, it works. And yet, perhaps most significantly, the record found Barnes dissolving his former band, at least for now, in favor of a new cast.

“When I first started recording it, I was thinking that it wouldn’t be called of Montreal—it would be a new band,” he says. “We were thinking about different band names, and what we would call it, and we never came up with one that felt natural. But I’ve taken all these turns throughout my career and done so many different things—I’ve basically had to redefine what of Montreal is so many times, I might as well go ahead and call it of Montreal.”

For the record, Barnes decamped to San Francisco to write for a few weeks, returning to Athens to record.

“I wanted to go somewhere outside of Athens where I could be out of my comfort zone and focus on writing for a period of time, reading and just living and [being] inside of my head for weeks,” he says. “It was kind of a risk to go out there and spend the money and get the apartment and book the flights and all that stuff. If I would have [gone] out there and had writer’s block, it would have been a horrible experience, but luckily, I felt very inspired.”

While Barnes typically builds his songs one instrument at a time, writing and recording everything himself, he completely altered his process for Sylvianbriar. Instead of using a computer, he taped everything live, limiting himself to a 24-track recorder. Instead of working alone, he wrote lyrics and chord progressions—basically well-hewn sketches—and presented them to his band to flesh out (normally, he uses his mates for touring purposes only). And although he opened up his recording process to include others, he simultaneously curbed outside collaborations with friends like Janelle Monáe, Solange and Kishi Bashi, all of whom have made significant contributions to of Montreal’s recent records.

The result is an album that sounds warmer, fresher and more organic than the band has sounded in years—at least since the one-two knockout punch of mock epics Hissing Fauna, Are You the Destroyer? and Skeletal Lamping. The record is unmistakably of Montreal, with its twisty arrangements and clever melodies, but it is also unique in the band’s canon. It’s looser, smaller and less strained (most of Montreal albums take months to a year to record; this one took just over a month).

Musically, Sylvianbriar‘s closest precedents are The Incredible String Band, Neil Young or The Burrito Brothers. Half flower-power histrionics and half-Americana. If you ever wondered what Barnes would sound like reciting his patented purple pyscho-babble in a Bob Dylan-esque cadence, your answer lies in the song “Amphibian Days.”

“I wanted to make a record in the way that bands used to make records in the ’60s and ’70s, and have it be a group of people in a room together tracking things live and basically capturing a moment in time,” Barnes says. “I just wanted [it] to feel very spontaneous and exciting and raw.”

With the pared-back sound, personnel changes and tweaked recording method, it’s tempting to say that Lousy with Sylvianbriar marks a new phase for of Montreal. And there are other end-of-era signifiers, too. Last year saw the release of the odds-and-sods B-sides collection Daughter of Gods, and a career-spanning documentary from local director Jason Miller is soon to come.

It all points to a purging of the old to make room for the new. But Barnes is reluctant to accept such an overly neat narrative.

“As far as revamping things and changing things around, I think that’s just healthy,” Barnes says. “I just want to stay inspired and excited for whatever organic spirit presents itself to me and chase it until I’m bored with it. And then I try to find something new.”