Migos are Masters of Epizeuxis 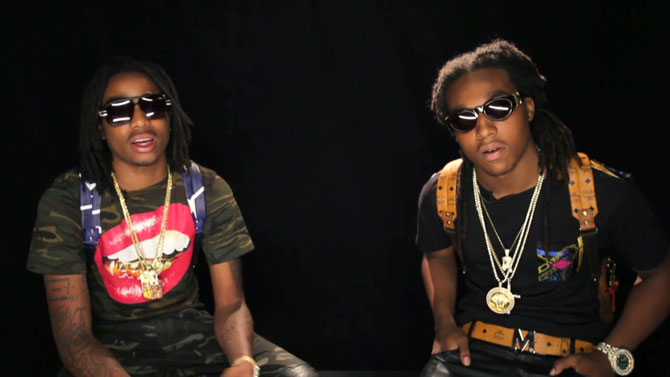 With a star-making mixtape called YRN (Young Rich Niggas) released this past summer—an international banger—and a little help from Drake (“He said if I do something, it’s gotta be “Versace” or “Pronto,” so we sent him “Versace” and he went crazy on it,” group member Quavo told Vice), Migos is poised to become Georgia’s next big thing.

Like many of the classic pop groups of radio past, Migos is a family affair. The group consists of Quavo, the oldest, at 22; his 19-year-old nephew TakeOff; and Offset, Quavo’s 22-year-old cousin, who recently finished a six-month stint in prison for a weapons charge. Each of the members was born and reared in Athens, but now mostly rep north Atlanta, where you’re likely to find them promoting their music in the club or holed up in their studio, writing nearly 10 songs a day.

Migos’ big break came when it linked up with Coach K, a manager who once oversaw the careers of Gucci Mane and Young Jeezy. The second watershed moment came when the group met Atlanta rap super-producer Zaytoven, who paired Migos’ buoyantly staccato flows with his own concoction of epic synths and breakneck snares. Before “Versace,” there was “Bando,” a regional anthem about selling drugs out of an abandoned, boarded-up home that became Migos’ first smash.

For listeners from Marietta to Milan (“Versace” was played by Donatella Versace herself during her spring/summer runway show this past October), it’s impossible to listen to Migos without smiling. Indeed, more than anything, Migos is a group that is dedicated to its own rhetorical whimsy. “You gotta have fun with a song, make somebody laugh. You gotta have character. A hard punchline can make you laugh, but you gotta know how to say it,” Takeoff told The FADER back in July.

Migos’ meme-bait lyrics have made catchphrases out of goofy lyrical throwaways like “Call FEMA” and “hurricane wrist,” while the collective’s absurdist ad-libs can turn even the most sinister trap jam into a tongue-in-cheek banger. The group also has that awesomely Southern tendency to squeeze every possible syllable from a word—just listen to these dudes turn up and scream “Charles Bark-a-lee” over a chorus about the cantankerous former NBA baller, and you’ll see why the Classic City natives have everyone furiously awaiting their next move.

Migos is prepping the release of its next mixtape, the appropriately titled YRN2, and recently put out Solid Foundation, a guest-feature-laden compilation highlighting the roster on the group’s label, Quality Control Records. Beyond music, Migos has been modeling for the streetwear line Rocksmith, and is reportedly making plans for even greater product extensions.

Migos’ show at Georgia Theatre is the trio’s first in Athens since playing in June at the recently departed club Aftermath, which also happened to be the same day that Drake dropped his iconic “Versace” remix. And while you may not have caught the group back before it blew up, we recommend seeing these hometown heroes on Monday in their element. At least then you can say you saw them before they went interstellar.