The Coathangers Blow Off Steam 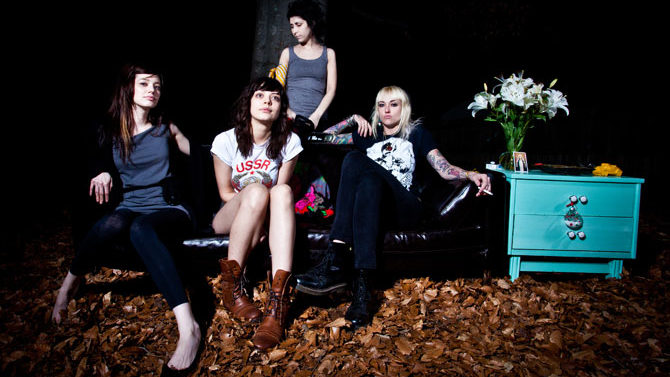 One thing you can say for the kids coming out of the Atlanta punk rock scene: they know how to have a good time with their audiences. While their Athens counterparts sometimes exude a too-cool contempt for their fans—see Muuy Biien’s Josh Evans’ “I don’t give a fuck about anyone here” acceptance speech at this year’s Flagpole Athens Music Awards—party rockers from the (big) A are keen to have a good time with their fans, rather than in spite of them.

Take the Coathangers, for example. The foursome came together seven years ago over a love of partying and, apparently, a shared vulgar taste in humor, and have been kicking ass ever since. The band’s 2011 release, Larceny & Old Lace, showcased the Coathangers’ developing songwriting chops, and the group’s hard-working tour ethic has won it a reputation as a live act not to be missed.

Their irreverence and the collective aggression of their live performances is a byproduct of the town the members of the Coathangers make music in, says singer and guitarist Julia Kugel.

“I think [the Atlanta scene] is pretty great, actually. Because it feels like life is challenging and hard, people want to let off some steam and just party. It’s more of a release at shows, of energy and pent-up aggression, and it feels a little bit more violent. We’ve definitely thrived in that sort of environment,” Kugel says, crediting the difference between Athens and Atlanta to the increased violence, grittiness and general hard-knockery that comes with living in “a dirty city.”

The music that Kugel and the Coathangers create in response to their surroundings is punchy, charismatic and a helluva lot of fun. From “Buckhead Betty,” a cutesy-sounding send-up of privilege from the band’s 2007 self-titled debut, to the throaty, searing “Hurricane,” the lead single from Larceny, the Coathangers have shown a range in both tone and style that keeps their music interesting and the listener’s fist pumping.

The four ladies—Kugel, drummer/vocalist Stephanie Luke, bassist Meredith Franco and keyboardist Candice Jones—have spent some time in the studio lately, working on a follow-up to Larceny; Kugel says fans can expect further strides on the next release, which is due out next year.

“[We’re] working on being better musicians, in a way, while still maintaining a sort of carefree attitude that we’ve always had,” she says. “At this point, if it’s going to be our fourth full-length, it’s got to be better. We’re trying to record it well, and be better, and more thoughtful of song structure.

“We’re pretty protective of us and our craft. There’s not a lot of people we’ve allowed in,” Kugel adds of the Coathangers’ process. But she credits musicians the band has toured with and folks like Ed Rawls of the Living Room Recording in Atlanta, where the Coathangers recorded their last album, with teaching the band little things along the way to help them polish their sound.

“We went on tour with […And You Will Know Us By the] Trail of Dead, and they were so stoked to teach us things,” Kugel says. “They’d be like, ‘Maybe you should try to hit the drum like that, because it gives it a flatter sound.’ A lot of people have taken us under their wing.”

With an ever-growing sense of musical know-how, an attitude that is by turns soft and snarling and a widely acknowledged on-stage swagger, the Coathangers promise a live experience that is materially different from that of listening to their records. We in Athens may be spared some of the big-city hardships of Atlanta living, but between the stress of school being back in session and the endless pent-up days endured this rainy summer, we’ve got some collective steam to blow off, too. The Coathangers’ show is as good a venue as you’re likely to find.