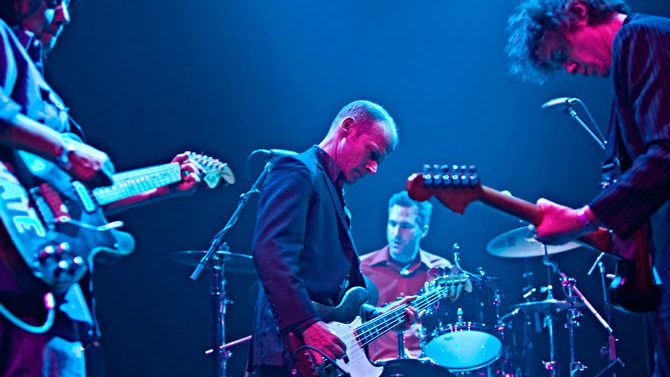 It’s been over two decades since Boston-based post-punk quartet Come released its stunning debut album, 11:11, via Matador Records. But listening back to the experimental, guitar-driven collection, nothing sounds dated. Featuring the raspy, howling voice of guitarist Thalia Zedek and the textured, Stones-ian slide-guitar work of Chris Brokaw, the bold collection is emotionally intense and often jarring.

“It’s an unusual rock record,” says Zedek, who says she is pleased to be back on the road this year with her original bandmates in support of a deluxe reissue of the previously out-of-print album. “It’s the sound of the four us after playing for months on end, coming up with our own musical language.”

Anchoring the tangle of moody guitar noise and guttural singing on 11:11 is a rhythm section comprised of two veterans of the 1980s Athens scene: bassist Sean O’Brien (Kilkenny Cats, Fashion Battery) and drummer Arthur Johnson (of Bar-B-Q Killers fame). By 1990, Johnson and O’Brien had relocated from Georgia to Boston to pursue new musical and academic opportunities, and thus begins the story of Come.

Brokaw, who had arrived in Boston in the mid-’80s, was a guitarist, though his first gig was as the drummer for slowcore band Codeine. Zedek, who had moved to Boston in the late ’70s from Washington, D.C., played in indie bands White Women, the Dangerous Birds, Uzi and Cell before joining New York-based avant-noise project Live Skull.

“Chris and I met through a guitar player named Jerry DiRienzo, a friend I had in Cell, which was sort of going on simultaneously with Live Skull,” Zedek says. “Jerry referred to Chris as an awesome guitarist and a big influence. He invited Chris to jam with us. I thought he was amazing, and we had a great rapport right away.”

When Live Skull broke up in 1990, Zedek moved back to Boston and called Brokaw. The timing was perfect, as Brokaw had just hooked up with Johnson and O’Brien.

“Live Skull had toured with the Bar-B-Q Killers, so I’d been a big fan of Arthur’s drumming for some time,” Zedek says. Johnson fondly remembers the musical chemistry that he and his new bandmates developed right away. “I’m not sure what we were trying to accomplish,” he says, “but… we knew we had a good connection.”

Come released a 12-inch single, “Car,” on Sub Pop in 1991. In 1992, the band entered Fort Apache Studios in Cambridge, MA with producers Tim O’Heir and Carl Plaster. The foursome recorded and mixed 11:11 in eight quick days, and Matador released the nine-song collection at the end of the year.

The unprocessed production quality of the album holds up well today, from the jangly, distorted guitar tones to the raw, rumbly sound of the drums and bass.

“When I listen back to 11:11, I have very little quibble with the performances of any of us—and I can be very critical, especially of my drumming,” Johnson says. “I think [the producers] did a great job of capturing our live sounds. It was an extremely good representation of what we sounded like at that time.”

The 11:11 collaborations showcased a remarkable balance of anguish and joy. Songs like the lumbering “Brand New Vein” and the stark, unhurried “Off to One Side” rely on minimal arrangements and gradual crescendos, while riffy, cacophonous rockers like the waltzy but brutal “Dead Molly” or anthemic “Fast Piss Blues” boil over with delight.

Meanwhile, the lyrics were often grim. “Some people assumed that all of the lyrics were about me,” says Zedek, who was recovering from heroin addiction at the time. “There was this misconception that we were all druggies and everything, sort of based on the music, [but] actually, that couldn’t be further from the truth. Both Chris and I were totally clean. Some people assumed that we were really depressed, but these songs were written after I came out of a really bad time. We weren’t really dark, fucked-up people.”

There were shake-ups down the road. Shortly after releasing the 1994 album Don’t Ask, Don’t Tell, Johnson and O’Brien announced their departures from Come. Drummer Kevin Coutlas and bassist Tara Jane O’Neil (both of indie band Rodan) replaced them, performing on 1996’s Near Life Experience and 1998’s Gently, Down the Stream. That version of the group played its final show in London in 1998.

But in 2010, the original four members of Come reunited to play a number of shows, including Matador’s 21st anniversary festival in Las Vegas and the TraniWreck Festival in Boston. Then, earlier this year, the band announced it would tour the UK, Europe and the U.S. to commemorate the 20th anniversary of 11:11.

“The first time we rehearsed ‘Dead Molly,’ it actually sounded pretty good—like we still knew what we were doing,” Johnson says. “Those first [reunion] shows were very exhilarating for us… On this tour, about two weeks in, we’d gotten to a point that I’d forgotten we could get to… I think that we’re communicating better, on stage and in general, these days.

“Some people who saw us back in the day say that we sound better now than we did back then,” he continues, “so maybe we’re doing things right.”

Matador’s Deluxe 20th Anniversary Edition of 11:11 hit shelves in May. Concurrently, Come toured from London to Prague, and last month the group embarked on a bi-coastal stateside summer tour that concludes with shows in and around Johnson and O’Brien’s old stomping grounds—the band will play the 40 Watt and Atlanta’s EARL this weekend.

“This is the least stressed-out I’ve ever felt playing with any band,” Zedek says of the current trek. “It’s kind of weird. But the chemistry is still there, and we’re such a unit on stage. These guys are all such great musicians, and I have a great deal of confidence in them. I go into every show feeling totally confident that it’s going to be a great show. It’s a unique feeling.”