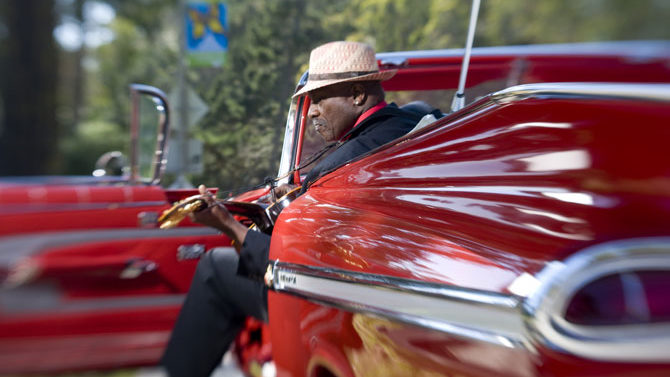 Singer, guitarist, pianist and Grammy winner Taj Mahal is an American music veteran of more than 45 years, with a massive catalog of songs. It skews towards blues, but it’s impossible to file Mahal’s body of work into a neat and simple musical category; it’s simply too worldly and inclusive to peg.

“It’s all connected,” Mahal says of the music he loves to play, hear and explore. “I think it’s one thing for people to say that we have all sorts of musical styles happening in the United States, but it’s another thing to go out and share it all with the rest of the world… It’s all related. When it comes down to music, it’s really the universal language, across the planet, the solar system and the galaxy.”

Born Henry Saint Claire Fredericks in 1942, Mahal grew up in Springfield, MA studying and playing piano and guitar with his family and friends. His father was of Caribbean descent, and his mother’s family came from upstate South Carolina. After attending the University of Massachusetts at Amherst in the early ’60s, he adopted the Taj Mahal moniker and kicked off a career as a professional musician and composer.

Mahal returns to Athens this week with the backing of his long-running rhythm section: drummer Kester Smith, who’s been keeping time with these guys since the late ’70s, and bassist Bill Rich, who’s played with Mahal off and on since 1969. The trio is on the road in support of a massive new box set released this past February, titled The Complete Columbia Albums Collection. The set includes all 10 of Mahal’s original Columbia albums, from Taj Mahal and The Natch’l Blues (both released in 1968) through Satisfied ‘n Tickled Too (1976), plus a movie soundtrack and two previously-unreleased albums, which comprised another recent release, The Hidden Treasures of Taj Mahal: 1969-1973. It’s 15 discs in all.

The box set documents a musician who has always known what he wanted.

“My thing was to be hands-on,” says Mahal. “After my first five albums, I started being listed as the producer of all the stuff, all the way up to today. I had a hand in the albums’ images, liner notes, the mixing, the mastering… the whole thing. I was involved in every bit of it.”

Today, decades after he wrote and recorded the songs featured on The Complete Columbia Albums Collection, Mahal’s classic material holds up quite well, from the raw, acoustic-based blues and folk stuff to the funky, soulful, exotic full-band tracks.

“Back then, I was able to have an idea in a dream one night and then have musicians come over the next morning,” Mahal remembers. “We’d all go, ‘Bod de bop de bop,’ and then record the song later that evening. We all used the same tools and spoke the same musical vocabulary, so we were able to create a lot of different types of music—sometimes by using the same tunes with different approaches. We could put the emphasis on jazz, blues, Caribbean, country, gospel or whatever. That kept it alive and kept the ball up in the air.”

Some music critics and fans back in the 1960s and ’70s didn’t quite get what Mahal was laying down, he recalls. “Along the way, some people weren’t all that favorable to my idea for the music being world-class and picking from so many areas.” Most modern music aficionados appreciate his range of style, though.

“This box set says, ‘No, this guy wasn’t a joke, and, no, he wasn’t just passing through and passing gas,'” Mahal says with a laugh. “I’m proud that this will allow listeners to consider this to be the work of a composer. Back in the day, I knew I could arrange songs.”

The tastefully remastered original mixes stay true to the uncluttered, no-frills production quality that Mahal preferred through his early years. Listening back to the classic material, Mahal says he is still happy with the sonic quality of the recordings, and the spontaneous way he sang and played.

“I was moving right along, so a lot of times I didn’t have a chance to hang out [in the studio to] fine-tune this and that,” he says. “We could have polished up a lot, but that’s pretty much what everybody else was trying to do… I liked the sounds I got, and I didn’t worry about trying to sound like other acts. It’s like Duke Ellington once said: ‘I’d rather be an over-the-top me than a second-rate somebody else.’ I knew that the songs came from what I was feeling and hearing. The object was always to create new things, so I enjoyed doing it. I always tried to create new ways to hear the music.”

During its current tour, the Taj Mahal Trio plans to play a lively mix of vintage tracks and more contemporary compositions. Mahal mentions a few standouts the band has enjoyed revisiting, including “Cajun Waltz,” “Why Did You Have to Desert Me?” and “Blackjack Davey,” from 1975’s Mo’ Roots, and “Statesboro Blues” from his 1968 self-titled debut. After the trio’s run through the Southeast this month, it will head to Europe, the U.K. and South America.

“We’re always up for some good stuff and staying busy,” Mahal says. “I am looking forward to getting into the Deep South on this trip and returning to Athens. Pretty much the last time I spent time in Athens was in 1999 when I made the Kulanjan record with [Malian kora player] Toumani Diabaté.” (Recorded at John Keane’s studio, Kulanjan was a 12-song collection of West African rhythms and verses with a tinge of American blues.)

“It’ll be great getting back there,” he reiterates. “We get into it, because we’re always informed by the South, no matter what. I think the audience there will hear that and enjoy it.”