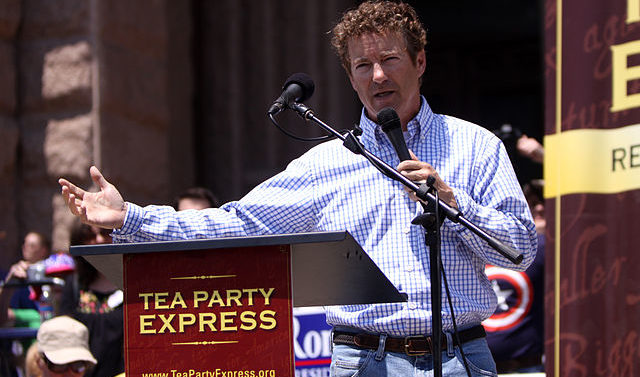 Paul had this to say to a Silicon Valley group on Tuesday, according to The Daily Beast:

The effect that anti-science stereotypes have on Republicans cannot be underestimated. “It’s hard to side with a party that’s still trying to reach out to their base of creationists,” said Obama campaign engineer Johnvey Hwang, in a San Jose Mercury News investigation of why Republicans can’t get traction in the valley.

So, as proof of his seriousness, Paul was quick to throw his science-skeptical colleagues under the bus. “Most Republicans live in this century, not two or three centuries ago,” he said, responding to questions about Georgia Rep. Paul Broun’s notorious YouTube rant, in which he called evolution and the Big Bang “lies straight from the pit of Hell.”

Yet Rand’s father, former Congressman and presidential candidate Ron Paul – with whom Rand is closely aligned – endorsed Broun. It’s understandable here: it’s not easy to appeal to both the anti-authoritarian bastion of San Francisco without abandoning his religious base.

Also file this under questionable statements: Sen. Saxby Chambliss (R-GA) thinks male soldiers just can’t help themselves from raping people, what with all those raging hormones.

“The other thing we have to remember as we think about making changes to the UCMJ, in this respect — the young folks that are coming into each of your services are anywhere from 17 to 22 or 23. Gee whiz, the hormone level created by nature sets in place the possibility for these types of things to occur.”

The Twitterverse, of course, was immediately outraged by an implication contained in Chambliss’ remarks – that the military is somehow different from high school or college or other places where all concerned are required, by law, to keep their urges under control.

To the senator’s credit, however, Chambliss dropped that line of thinking and closed with this:

Pro tip for Republicans: If someone asks you about rape, say it’s wrong and shut up. It’s not natural. It’s not a blessing. Your body doesn’t have a way of shutting that down. It’s wrong.