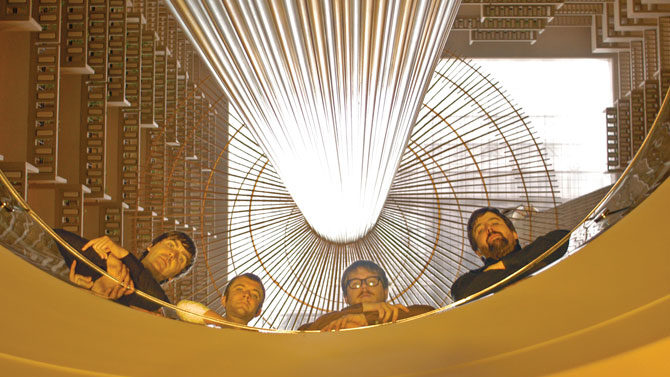 Music can be a beautiful way to remember a friend who has passed away, acting both as catharsis and tribute. But what if youâ€™re in a band that doesnâ€™t have a singer? If youâ€™re local psych-rock quartet Maserati, you scrap the tribute song idea altogether in favor of a tribute album.

â€œAround 2005 or so, when Jerry joined the band, he definitely was bringing some new influences in, and [he] propelled us into a more uptempo kinda thing,â€ Maserati guitarist Coley Dennis says of the band’s late drummer, Jerry Fuchs, who died in 2009 after falling down an elevator shaft in Brooklyn.

Maserati VII is Fuchs-style uptempo. Packed with tight loops and punctilious playing, the album swaggers back and forth between Atari-soundtrack synths and braggadocio-soaked guitars. Although itâ€™s not explicitly a tribute record, it leaves the distinct impression that the band continues to celebrate Fuchsâ€™ influence.

And with his replacement, Mike Albanese, behind the drums, Maserati sounds as tight as ever, both in-studio and onstage.

â€œ[Jerryâ€™s were] big shoes to come in and try to fill, but Mike was stoked about it. Heâ€™s been friends with us for 10 years. He definitely brings a lot of muscle,â€ Dennis says.

â€œJerry was a big, looming force in the band and in our friendship and everything else,â€ he continues. â€œAnd there was always kind of a thing when we were working and thinking, ‘Well, what would he do here?’ We thought that a lot. And a lot of times it was obvious.â€

One song in particular strikes Dennis as especially Fuchsian. â€œThere is one solid song called â€˜Abracadabracabâ€™ that has a really long drum solo, and he was definitely on our minds when we were writing it. We were definitely trying to step out of our box and try something new. Itâ€™s, like, an 11-minute song with a four-minute drum solo. Thatâ€™s something he really would have been stoked on, recording that.â€

The album finds Maserati branching out in other ways, as well. One development that may strike longtime fans is the inclusion of vocals on â€œSolar Exodus.â€ They may be filtered through a vocoder, but theyâ€™re lyrics all the same.

â€œWe knew it would be cool to have this Gary Numan/Kraftwerk voice over it,â€ Dennis says, noting that â€œwriting lyrics for a band that had never had lyrics beforeâ€ caused a little hand-wringing for bassist Chris McNeal, who penned them. â€œIâ€™m really glad that we did that, because it kind of makes the song. 99.9 percent of the time, I canâ€™t imagine vocals on any of our songs, but luckily Chris took the reins.â€

These days, Maserati is looking forward to a late-fall tour to promote the album. Kicking things off in Atlanta on Oct. 26 (with a 40 Watt show the following day), the band will pack 20 gigs in under a month, traveling everywhere from Georgia to Philadelphia to Minnesota and back. The group’s website promises youâ€™ll find it â€œdragg[ing] the glory years of psychedelic arena rock kicking and screaming into the 21st century.â€

Humble and polite in person, Dennis hardly calls to mind the typical cocksure rock star. But damned if he, and the rest of his band, canâ€™t play. With the kind of assertive confidence Maserati brings to its music, extemporaneous onstage swagger isnâ€™t really necessary. Everything other bands might use lyrics or image to convey is right there in the music.

Close your eyes during â€œThe Eliminatorâ€ and try not to imagine yourself behind the wheel of a spit-shined sports car, surrounded by smears of neon, destined for unknown adventures in some city’s seedy underbelly. Perhaps no band in recent memory has had a more apt moniker.

You might expect to find a distinct tinge of sadness on the first record Maserati’s members have written and recorded without Fuchs. What you get instead is an album swollen with the sounds and attitudes their late friend loved. And that may be the most fitting tribute of all.