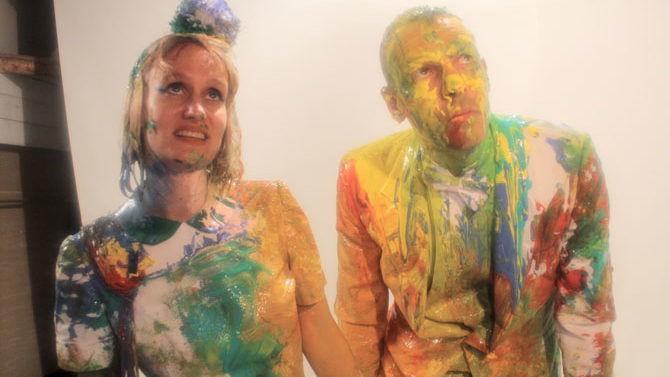 Mr. Quintron is a beguiling figure, a man of many names, depending on which website you trust (he claims none of them are correct). Trotting around the South with his fused-together, one-man-band jalopy, the light-activated electronic drum machine that he invented (he calls it the Drum Buddy) and his equally enigmatic partner in crime, master puppeteer Miss Pussycat, the New Orleans-based musician’s inimitable brand of blues-based, organ-centric swamptronica serves as the locus for a performance unlike that of any other act working today.

Flagpole caught up with the mysterious virtuoso in the wake of Hurricane Isaac to talk about his recent record, 2011’s mindbending, genre-expanding Sucre du Sauvage, and his upcoming Athens gig.

â€œWeâ€™re havinâ€™ a hurrication,â€ Quintron begins. â€œIt knocked the power out for more than a week. A harmless little tropical storm, category one, turned into a complete fucking nightmare and murdered a lot of people. Everything was fine. It was just [that] the city was literally shut down for a week and a half and everyone was just drunk all the time, so even when the power came back on people were still partying, because it was Labor Day, and it was impossible to do anything different. Towns to the north of us got it worse, because the storm surged full steam. It flooded in places it never, ever floods.

â€œAnyway,â€ he continues, sounding somewhat relieved to move past the storm, â€œgetting back to my normal life, we are editing this new puppet movie thatâ€™s gonna be out in November [Trixie and the Treetrunks: Mystery in Old Bathbath]. Weâ€™re doing the final edits on that. Youâ€™ll see Miss Pussycatâ€™s full puppet show at the Farm. Thereâ€™ll be, like, a 15-minute storytime before the concert.â€

Sucre du Sauvage was recorded over a period of three months inside the New Orleans Museum of Art. â€œWell, they asked us to do an exhibit,â€ he explains, â€œand Miss Pussycat is a proper artist. She builds things, and sheâ€™s a puppeteer, and I just work with her. I didnâ€™t even know how I would contribute in an art museum. And then I had the idea that, I know, if I canâ€™t do anything else for the exhibit Iâ€™ll fuckinâ€™ walk in there, and bring all my instruments in, and record a record. Make it into a kind of a weird test.â€

In addition to the Drum Buddy, Quintron has invented several other instruments, including the Disco Light Machine, the Spit Machine, and most recently, the Singing House.

He explains. â€œThe Singing House is literally made to be installed into an entire building. Itâ€™s kinda like an intercom system. In a nutshell, wind speed, the intensity of the sun, the position of the sun and the amount of rainfall all affect it. There are light sensors, rain sensors, anomometers, and as the weather modulates, it will produce bubbling chords.” (A demonstration video of this strange, admittedly dazzling contraption can be viewed on the front page of Quintron’s website, quintronandmisspussycat.com.)

As for future plans, the duo is certainly keeping busy. â€œAfter this, weâ€™re gonna go to Europe for a month, and in-between tours weâ€™re finishing editing the film. Weâ€™ll probably spend the next year kinda premiering and touring.”

Of course, in New Orleans, the fun never stops. “Thereâ€™s also Mardi Gras,” he says. “We have a hundred-person marching band that we direct out of our house and march in [the] Mardi Gras parades.â€

Our conversation over abruptly before it seems to begin, this fantastical phantom organist from the deep, deep South signs off with a gracious but somewhat subversive requestâ€”words all too fitting for this still-young academic year.