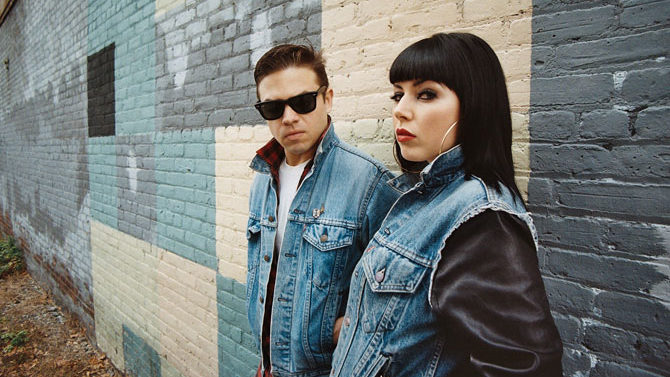 Back with a shreddier, bloodier and more adult-minded sophomore release, Reign of Terror, Alexis Krauss and Derek Miller will make their first trip to Athens with a performance at the Georgia Theatre.

While Reign of Terror certainly maintains Sleigh Bells’ signature sound, the record is a much heavier affair than the comparatively candy-coated Treats. The bubbly, effusive Krauss is well aware of that fact.

â€œTreats has a certain levity and sense of abandon about it that Reign of Terror doesn’t have,â€ she offers. â€œReign of Terror is lyrically a much darker record, and I think, melodically, it’s a bit more sophisticatedâ€”and it’s obviously a much guitar-heavier record.”

These days, Sleigh Bells moves at the speed of light. Says Krauss, “It’s interesting thinking about the first two records, because I’m in third-record mode. We just got out of the studio and we have three new songs recorded.”

Although Krauss has explored various musical avenues throughout her life (as a teenager, she was a member of saccharine pop group RubyBlue; she did session work throughout college), she admits that Sleigh Bells was something of a surprise.

â€œI sort of pushed away from music for a few years,â€ she explains. â€œIt just wasn’t something that I saw myself doing again, unless I could do it on my own termsâ€”unless I could work with someone who shared my convictions.

“I was doing Teach for America when I met Derek,” she continues. “He lived in my neighborhood, and we would just work on tracks, and one of the first things that we did was record ‘Infinity Guitars.’ I remember when he found the vocal for that, which already existed, but it felt like something that was composed for meâ€¦ There was something sort of magical about our relationship, because from the beginning we had this rapport and this understanding of what [we both] wanted.â€

As for her band’s burgeoning popularity and tidal wave of commercial opportunity, Krauss makes no apologies.

“Every single licensing opportunity comes directly to us,â€ she notes right off the bat. â€œI think we’re pretty liberal. Obviously, we don’t give it out to every company that asks. But, that said, a lot of times people think because you’re an ‘alternative’ band that you shouldn’t whore out your music to companies, that you should maintain a certain level of credibility with your fans.

“But we’re pretty sure about the integrity of our music,” she says. “We’re trying to make a living, and you don’t make much from touring and record sales. It’s just the reality of the modern music business. We feel very strongly that our music is very inclusive, rather than exclusive, and the more people hear about us the better. I think it’s perfectly legitimate to find out about our songs from a Victoria’s Secret commercial and come to our show. That fan is just as much of a fan as the fan who’s been reading about us on Pitchfork. I don’t really see the difference.”

She’s an unassuming presence on the phone, but this Thursday Krauss will be rocking the Classic City at the top of her lungsâ€”and rocking TVs and movie theaters around the world at the same damn time. Kinda cool, no? Sleigh Bells, slay on.