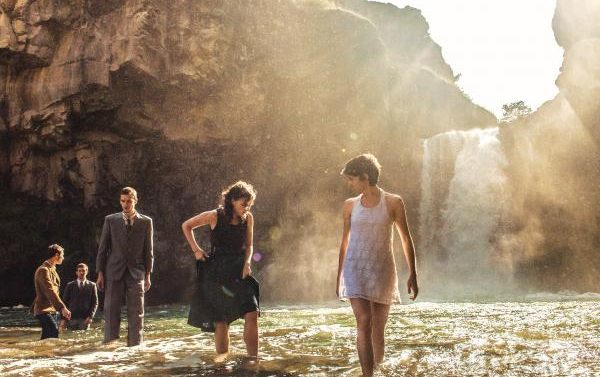 Saturday night, I slipped quietly into a three-band show at the 40 Watt to catch the brilliant middle act: shimmery, ethereal folktronica outfit Hundred Waters, out of Gainesville, FL. Centered around the controlled, almost yogic vocal contortions of frontwoman Nicole Miglis, the band’s live show proved a wildly different animal than last year’s self-titled debut (#7 on my Top 10 for 2012; stream it below).

Where the album bathed in the soft light of pastoral, English folk and subtly infused those mysterious, Druidic passages with the sounds of modern electronica, the band’s live show foregrounds those modernities, allowing Miglis’s voice to dip, dive and soar amidst dubby basslines and ambient swirl. The entire performance was far more danceable than the band’s recorded material would ever suggest, and that seemed to suit the youngish crowd just fine.

Having (rightfully) earned comparisons to artists like Bjork, Dirty Projectors and Joanna Newsom over the past year, this is a band that’s clearly already in an elite class with regards to songcraft. What’s more, the group maintains an accessibility amidst their experimentation that none of those artists can claim. In short, these guys are going places, and it’s a good bet they won’t be in the middle slot the next time they come through town.