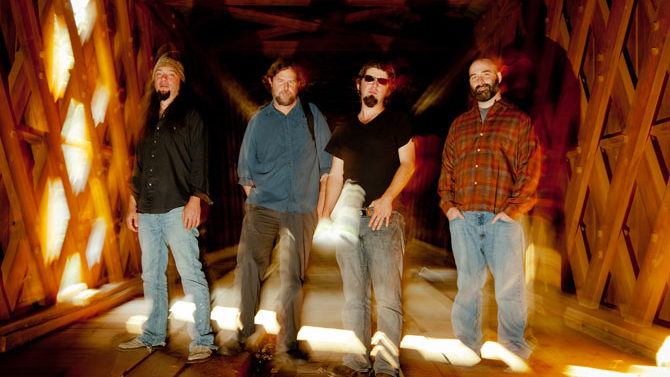 Does the world need another loud Southern rock album about whiskey, dogs, mamas, whiskey, being broke and whiskey? It’s tough to argue that it does, and good luck with that task if you choose to take it up. But whether that’s what the world needs isn’t particularly the point, ’cause in this case, another loud Southern rock album is what Scott Low needs.

See, Scott Low’s got this band called Efren. They’re from hereâ€”maybe you’ve seen ’em out; they play a ton. And in less than three years as a band, Efren’s put out into the world a serious amount of music: EPs and full-length albums both. Efren’s past releases have tended toward a more exploratory Southern folk sound, getting quiet and haunting at times, and occasionally ramping up the volume. But Efren is a touring band, and touring bands play in bars, and people in bars are drinking and talking, especially if you’re a band from out of town and your friends aren’t in the audience. So, Scott Low needed a loud Southern rock album because Scott Low needed to get that audience to pay attention.

And so: Write a New Song. It’s the brand-new full-length album from the four-piece comprised of Low, Jonathan Brill, Darrin Cook and Jamie DeRevere. “With Efren I’ve just been cranking out songs for two-and-a-half years now,” says Low, sitting on his porch last week with Townes, his girlfriend’s German shepherd/husky mix. “A lot of it’s sort of an evolution of playing in clubs where nobody cares, and trying to get their attention. This is a record of more rock anthem-y stuff, with the previous albums being more folk escapades. I definitely went into it thinking ‘rock anthem.’ Try to get people into it. That’s one of the reasons I started Efren, to catch the audience more and get their attention on me, more than what happens if I’m just playing lead guitar for whoever calls me, y’know? More to be able to have some sort of attention with the audience than shredding a guitar. I think I loved what we’re doing, but I think we can put a little beat behind it with a free-jazz rhythm section.”

Several times, Low calls the tunes on Write a New Song “angry rock tunes,” and it’s not just audiences that are more interested in a brew than a band that get his goat. See, Low went through a divorce with his son’s mother a while back, and that was right when he was in the middle of writing the songs that ended up on the new disc.

“Well I got divorced,” he says. “My wife left me last January, 14 months ago. It was pretty bad. The songs were already sort of works in progress, but that definitely changed my mood and what I felt like I had to say.”

And Low, who plays guitar and sings with a twangy, guttural baritone that sounds kind of like Chad Kroeger borrowing Patterson Hood’s phrasings, decided to be more direct with his lyrics, too.

“I still write these weird analogies and metaphors that a lot of people can draw their own conclusions to, but at the same time there’s a lot more straightness on this album,” he says, “ranging from divorce to the experience of 200-plus shows with four guys. There’s a special societal army of friends that I have after nine or 10 years of being in Athens, and I wrote songs about that. It’s a lot more of a party-rock vibe, but it still sounds like Americana.”

Readers who’ve kicked around town a bit may remember a dude called Scott Leon-O’Day who played in jazz bands in town for much of the last decade. Leon-O’Day and Low are the same dude: he’d formerly hyphenated his last name with his wife’s, and that fell apart, and he also wanted to rebrand himself, make his band (and some solo tunes he’s working on) easier to find through Internet searches. But he’s the same guy, and that jazz background informs a lot of the ballsy sound of Efrenâ€”which, speaking of names, was given its name to honor Low’s former father-in-law.

“I think [playing jazz involves] a lot of trust,” says Low. “Jazz instilled this confidence or trust within me. We’ll jam out sometimes, we’ll do a little Allman Brothers or Neil Young tears on the new album, and we’ll definitely extend stuff live if it feels right, and that comes from jazz. When I started Efren, I thought, ‘We’ll play real simple folk and rock songs,’ but now four albums later, I think it’s broadening a little and we can pull from my jazz heritage a little more.”

Write a New Song was recorded in Watkinsville’s Full Moon Studios, and the band should have copies of the disc available at this weekend’s show; it gets a more official release later this summer. Low’s excited to get it into the world, and it seems like it’s the right thing at the right time for him.

“I grew up on all that Southern country stuff,” he says. “Even though I did play jazz for 10 years, I’m definitely a country boy at heart.”