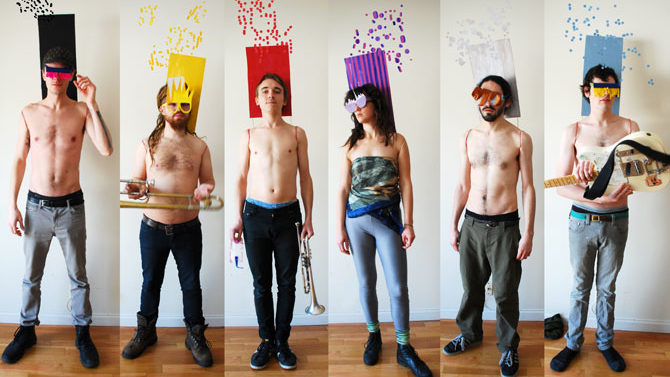 â€œWord-of-mouth has been the way weâ€™ve grown and extended since we started,â€ says Traver, speaking last week from the jam-packed band van, en route from San Diego to Salt Lake City. â€œWeâ€™ve just been playing live for a long time now, and we really enjoy it. I think thatâ€™s where we have most of our energy. We love being around each other, being silly offstage and being really playful musically onstage.â€

Traver and her boyfriend, trumpeter Alex Toth, have been the core members of the band over the last four years. They met while attending the University of Vermont in Burlington. Before Rubblebucket, they toured and played together with rock/reggae group John Brownâ€™s Body for three years. The two have welcomed a rotation of musicians into the lineup.

Since last fall, Traver and her bandmates have toured heavily behind their latest studio album, Omega La La (their third full-length). Paste magazine designated the funky song â€œCame Out of a Ladyâ€ as a top-50 tune of 2011. The video for the song, directed in-house by drummer Dave Cole, placed the band inside a giant Technicolor tent designed by Traver, with head and arm holes for each band member. It instantly became a fan fave on YouTube.

â€œCame Out of a Ladyâ€ is just one of many songs on Omega La La that pulsate with textured rhythms and bounce from one musical style to another. With three horns, guitar, organ, percussion, drums and bass, the band is well equipped for just about any sonic exploration.

â€œWe can feel ourselves grow,â€ Traver says. â€œWeâ€™re excited about using each other’s strengths and the sound of the instruments. Weâ€™ve felt like weâ€™ve been able to engage fans quite well from early on, and weâ€™ve been able to develop our own sound… I think weâ€™ve really come into our own sound now more than ever before,â€ she adds. â€œSome people think itâ€™s such a jumble of genresâ€”from rock and roll and pop to other things. Thereâ€™s no name for it; the music is its own thing. We have some interestingly complex arrangements and some deep grooves that are danceable and also engaging on an intellectual level. Also, there are top harmonies and melodies going on that are funâ€”especially for people who are interested in having fun.â€

Having a weird, good time seems to be the general theme on Omega La La. Produced by Eric Broucek (LCD Soundsystem, !!!, Holy Ghost) at DFA Studio and mastered by Joe Lambert (Animal Collective, Dirty Projectors, Herbie Hancock), the sense of energy and spontaneity on the collection is impressive.

With positive critiques and an accelerating buzz, Rubblebucket has plenty of momentum behind several spring and summer tours, which include gigs at small clubs, large concert halls and a few huge outdoor festivals across North America.

â€œI totally feel like we can do magical shows at any venue,â€ Traver says. â€œAs long as thereâ€™s energy in front of me that I can participate in, Iâ€™m happy.â€