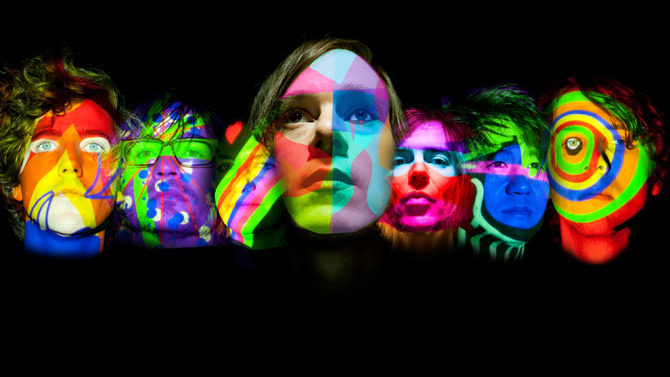 When a band like of Montreal announces they’re doing something different, itâ€™s not easy to imagine what they could possibly have up their sleeves. For the past 16 years, frontman Kevin Barnes has made an entire career out of doing something different. From onstage battles between performers in animal masks to ballads about the mythical post-op transgender Georgie Fruit to a fully nude performance in Las Vegas, anything further into the realm of â€œdifferentâ€ could mean a show of holograms beamed in from Mars. (Thatâ€™s not the case, but if anyone were going to make that happen it would be these guys.)

The songs Barnes pens deal with the sorts of dark themes and out-there concepts that arenâ€™t typically associated with pop music. Yet, fans of all ages and genre preferences gobble up records and live show tickets like frenzied addicts chasing a fix. Trying to stop listening to this band is like trying to look away from a car wreck. However, instead of mangled metal, imagine psychedelic cartoons, neon feathers and lots and lots of glitter. Now enters the dark and highly intense Paralytic Stalks, of Montrealâ€™s 11th full-length album that was released last month. Itâ€™s not electronic dance music, and it certainly isnâ€™t twee pop, but itâ€™s still unmistakably of Montreal.

â€œI was just going through a very dark period, and I was sort of relying on music to help me navigate through it,â€ Barnes says. â€œI wanted to use that negative energy to inspire something that maybe is sort of hateful and terrible, but at least it represents where my head was at.â€

While Barnes isnâ€™t a stranger to autobiographical music, itâ€™s been a while since he bared his soul quite so candidly. of Montrealâ€™s first record, 1997â€™s Cherry Peel, was fully drawn from Barnesâ€™ life experiences, but most albums since have concealed all personal feelings behind his own made-up characters and dimensions. This time, itâ€™s purposely different.

â€œI think that my hope is that when people listen to it they will realize that, yes, it comes from a place of pain but, in that way, other people who are in that state of mind can feel comforted and know they arenâ€™t alone in their craziness and know that there is something universal and we all go through it,â€ Barnes says. â€œI think that of Montreal, you know, weâ€™re freaks ourselves.â€ Although Barnes generally writes songs alone, Paralytic Stalks also features collaborations with musical virtuosos K Ishibashi and Zac Colwell of Brooklyn new wave revival outfit Jupiter One.

â€œAt the time [of writing the album] I was getting really into 20th-century avant-garde classical music and certain compositional techniques they were using, and I wanted to incorporate that into my sound,â€ Barnes says.

Translating Paralytic Stalks into a live show, however, proved to be a much more difficult task. To achieve this feat, Barnes employed the artistic assistance of his wife Nina and brother David. The resulting animations are projected onto multiple screens, as well as every other available onstage surface, similar to the psychedelic artwork 1960s acts like Pink Floyd and the Velvet Underground used to enhance their own audiences’ experiences.

â€œWhat weâ€™re doing is really complexâ€”especially on the budget that we have,â€ Barnes says. â€œThere arenâ€™t that many people attempting this sort of thing with nothing to work with. Itâ€™s a real labor of love trying to realize this vision.â€ The first performance of the tour, which took place at the Georgia Theatre in February, met with mixed reviews. While some were thrilled with the change in sound, others were disappointed by a lack of the bandâ€™s signature upbeat, dance-y material.

â€œItâ€™s a really diverse record. There are certain moments where I can see that it wouldnâ€™t be that commercial,â€ Barnes says. â€œBut when I was creating the record, I wasnâ€™t really thinking about a listener, and I wasnâ€™t worried about an audience. I think thatâ€™s the way you have to create art anyway. Otherwise, itâ€™s sort of paralyzing.â€

While his band’s new incarnation is certainly different, itâ€™s not necessarily a conscious change aimed to shake listenersâ€™ perceptions of the group. According to Barnes, from inception to delivery, the impact of the music is not fully within his control, and itâ€™s hard to predict what will come next. â€œItâ€™s like this organic spirit that is just evolving and changing,â€ Barnes says. â€œAnd Iâ€™m just sort of chasing after it.â€

Flagpole will be chasing of Montreal to Austin this week at SXSW, and fans in Georgia can catch the band again at the Variety Playhouse in Atlanta on Apr. 7: their last Stateside show before touring Europe.