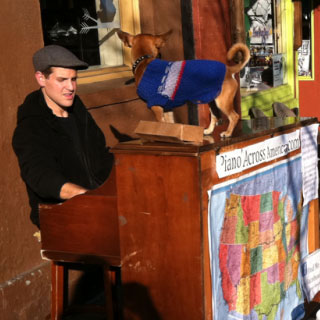 Mid-afternoon on the corner of Broad Street and College Avenue, 25-year-old Dotan Negrin stands up from behind his well-traveled piano to ask if anyone in the small audience can play the keys. A shy, middle school-aged girl raises her hand. â€œWant to come up here and play?â€ Negrin asks, but the girl vehemently shakes her head. â€œCâ€™mon,â€ he says. â€œItâ€™s OK. I make mistakes all of the time.â€ Finally the girl shrugs, takes a seat next to the cross-country traveling street musician and begins to play. To the crowd, this is an exciting Saturday afternoon spectacle, but for Negrin, this is just a normal day on the job.â€¨Negrin wasnâ€™t born a wandering gypsy, as you might be inclined to assume. Three years ago he graduated from Philadelphiaâ€™s University of the Arts and returned home to Long Island, NY to find work as an actor. Between auditions and unpaid gigs, Negrin paid the bills doing everything from day trading and real estate to selling used items on eBay. However, like many 20-somethings, he wanted more.

â€œI went to work for this real estate firm, and I was there for three weeks before I was like, â€˜Fuck this; Iâ€™m not going to spend my life sitting in some office and running around like crazy.â€™â€â€¨He formed his own local acting group and attempted playwriting and screenwriting, but says none of these efforts created the result he desired.

â€œI met these other actors who were doing the same things at 40 that they were doing when they were 20, and it terrified me,â€ Negrin says. â€œSo, I thought, â€˜How can I take matters into my own hands? How can I create success for myself?â€™â€

He quickly got to work poring over marketing and business books in search of a strategy. â€œI wanted to learn how to maintain my artistic integrity, but still make a living off of it,â€ he says.

In December of 2009 he took a delivery assignment for a local photographer that sent him on a road trip from his home state to Miami. It was during this trip that he came up with the idea for Piano Across America.â€¨Unlike many recession-era graduates, Negrin didnâ€™t wallow in self pity or blame the economy when he didnâ€™t land his dream job immediately. He didnâ€™t settle for a 9-to-5 cubicle farm and fade away into the quiet, either. Instead, in April of 2011, he packed up his piano, his laptop, his Jack Russell-Chihuahua mix, Brando, and a few survival necessities into a banana-colored box truck and set out on a journey across the country.â€¨In the months that followed, Negrin says he grew more than heâ€™s ever grown before. He survived solely from the donations of others, met over 500 people, encountered some of the most influential conversations of his life and came home with cash in his pocket.

â€œI donâ€™t want to come off too strong or impose my philosophy on anyone,â€ Negrin says. â€œBut I want to extend a hand to people and say, â€˜Look, Iâ€™ve taken some risks and broken myself out of this routine and, if you want, you can, too.â€™â€â€¨To date, Negrin has played in the parks, street corners and beaches of over 30 cities across the U.S., and all the while heâ€™s been keeping a log of his experiences on his site: Pianoacrossamerica.com. In the future, he says he wants to start a nonprofit, take his piano across the world and do something heâ€™s always wanted but only recently found the courage for: play piano onstage.

â€œI donâ€™t question what Iâ€™m doing,â€ Negrin says. â€œIâ€™m at the point where Iâ€™m so confident that I swear I canâ€™t see myself doing anything else.â€