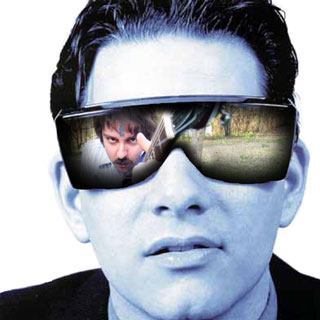 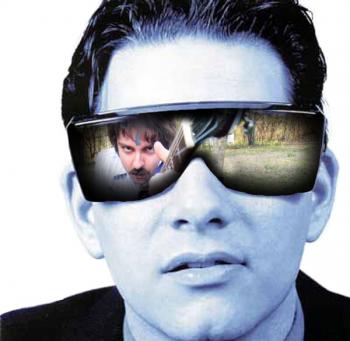 NeSmith through the eyes of Condescending.

Musicians Jason NeSmith (Casper & The Cookies) and Don Condescending (The Shut-Ups) have been buddies and musical collaborators since they met in sixth grade at Atlanta’s Paideia School. For this week’s Mixed Tape Wars, NeSmith and Condescending devised mixed tapes that would capture each other’s musical essence. Says Condescending, “people of the future will need maps of our musical DNA should they ever decide to clone our respective aesthetics.”

1. “Pinball Ride” by Sounds From the World of Sid & Marty Krofft

Don Condescending on why he picked this tune:

It is 1977. You are a four-year-old riding a 10-story escalator to the top floor of an Atlanta shopping mall, where children’s entertainment gurus Sid & Marty Krofft have erected, for no apparent reason, an indoor amusement park. At the entrance to the park, glittering gloves usher you into a giant silver ball, where a robot launches you into a giant pinball machine. You take several turns on the ride, feeling that a great mystery has been revealed. You return the next weekend, only to find the escalator blocked off, the park closed forever. The escalator remains, however, for years and years, a towering monument to lost paradise. This is what you heard on the day you made it to the top of that escalator.

Jason NeSmith’s Reaction: Lest you think I’m big on disco, it’s the microtonal synth stuff at 2:00 that warped my brainz. I’m still chasing that sound.

2. “Question” by The Moody Blues

DC: Some children have teddy bears to sleep with; Jason had a warm security blanket of reverb. Night after night, The Moody Blues wrapped this cherub-faced boy in angst-ridden psychedelic existentialism. The otherworldly vibe would lend to his troubles a sense of poetic dignity. Then, in the morning, he would wake up to the sobering truth that he was a glasses-wearing fat boy that nobody loved.

JN: That’s not entirely true. That was back when my mom loved me. The Moody Blues is the only band I can listen to without my inner critic growing restless.

DC: No one is better than Jason at finding discarded crap from the auditory junkyard then transfiguring it with the right mouse click at the right time. This song appears on an album McCartney whose offhand vibe and seemingly half-assed songwriting practically demand that you toss the disc into the dung heap.

DC: The Zappa influence can be fatal to impressionable youths who tend not to realize that Zappa’s sense of humor is often really lame; this has stunted the artistic growth of all but a few disciples. Jason is the rare Zappaphile to have transcended the limitations of his former master.

JN: The only thing more annoying than people that hate anything Zappa-related are people that love it.

JN: I thought for sure this is where the Gabriel-era Genesis slam would go.

DC: Jason went to high school in Germany where he quickly discovered the aesthetic values of minimalism (playing less, saying less, feeling less) before forsaking them at the first opportunity to join a hair band.

JN: It turns out Germans like Starship even more than Americans do.

DC: Imagine The Beatles. only with massive stage fright, fear of success and other debilitating neurological disorders. It’s nice to have heroes with problems.

JN: I always wanted to be in a critically acclaimed, financially ruinous band. Dreams DO come true.

DC: Jason has always been more of a head-bobber than a head-banger; I have observed that this exact tempo unfailingly triggers in him the head-bobbing reflex. Also, he likes singers who sound eager to get started on their mid-morning booze nap.

JN: This song is secretly nasty!

DC: Jason has long been impressed with how this recording runs counter to industry production standards by making the listener feel he is in a place more cramped than that which he technically occupies. When he plays this song in his van, Jason feels as though he is driving a bumper car, whilst, seated next to him, Robert Smith hyperventilates seductively.

JN: These days I prefer to listen to records without any Robert Smith on them.

DC: Cage apparently intended this piece, with its three silent movements, to be more than an exercise in perversity. The listener is supposed to accept as music any sound—a sniffling nose, a crying baby, a buzzing florescent light—that happens to fill the void. Nobody can really do this, of course, but Jason routinely comes close to doing it…that is, as close as a human being can come without having his ears confiscated by the angels.

JN: Reader, you can try this at home! All you need to do is put the paper down and stare and things indiscriminately.

JN: Pre-pubescent Don’s first role model was Bowser, the überstud with a congenital jaw defect. The fake cool-guy shtick will come in handy when Chris Snell has to find someone to be on stage besides himself.

2. “The People In Your Neighborhood” by Sesame Street

3. “Scenes from an Italian Restaurant” by Billy Joel

JN: Eight minutes of Beatle-esqe harmony and semi-theatrical pretensions lead Don down the primrose path to the door of his favorite artist, whose mailbox reads: I’m Billy Freakin’ Joel, and you’re just a stupid mailman. Don played this song for his 80-year-old neighbor. Then he made a cryptic reference to this event in one of his own lyrics. That’s the kind of weird stuff true artists do when they’re 11.

JN: Don’s love of song lyrics brought him to another house, but this mailbox said: “No phone can take your place, you know what I mean.” On the other side of that very ugly door sat Jon Anderson and his housekeeper Simon LeBon, whom Don was told—in the Duran Duran tour program—was a “lyrical genius.” He dutifully absorbed as much crappy genius as he could.

DC: Smelling like he sounded, Simon answered the door with a question mark, then shook up the picture (the lizard mixture) and tried to find my mountain hideaway. All of which, he denied. The morning after, I noticed that voices in my body were coming through on the radio; crappy genius had become a reflex.

JN: Misery was teenage Don’s new best friend. And so was I. He bought Pink Floyd: The Wall on cassette and became irate when I copied it. I had made him an unwitting accomplice in an illegal act. We avoided talking to girls by dissecting the album and trying to feel as miserable as possible.

DC: Those were the best days of my life.

6. “Beginning To See The Light” by The Velvet Underground

JN: In 1986 Don told me that Lou Reed, that weird old guy, was actually totally awesome. A year later, he was the first guy under the age of 18 to like The Pixies. Before the important thinkers of rock culture could agree with him, Don decided he didn’t really like those bands anymore.

DC: They were okay.

8. “Mayor Of Simpleton” the XTC

JN: Don had a subscription to Rolling Stone as early as 1984 and kept a book in which he wrote down chart stats like they were baseball scores. Based on their review, we both bought Oranges And Lemons. Then we recorded three albums in two weeks.

JN: By 1997, Don had become a masterful songwriter without a master. One day he heard Sparks, and he knew that he was accidentally not born a Mael brother.

JN: The universe, in an effort to show that Don is right and we should have known it, makes Jarvis Cocker rich and famous for writing pop songs from the perspective of an unreliable narrator, maintaining an ironic detachment, and making his listeners feel enlightened, vindicated and victimized. It should have been you, Don.

DC: Thanks, Jason, but I have always thought of victimization as its own reward.

Ed note: You can catch The Shut-Ups and Casper & the Cookies when they share a bill at the 40 Watt Club on Friday, July 22.