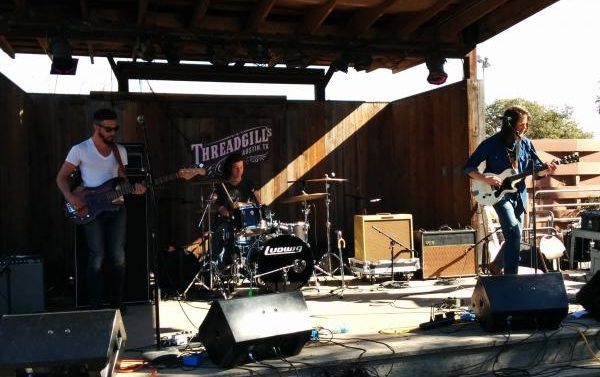 Let me start out by saying that I’m OK, too. You do not understand how important you are to your friends and family until you are in the vicinity of a tragedy and folks begin texting or calling to make sure that you’re safe. It truly means a lot. And while everyone in Austin is doing their best to have fun in spite of last night’s tragedy, it is obvious that we are in the wake of something awful.

I’ve seen a lot of great showcases in my two years at SXSW, but I can say with little doubt that the New West Records day party is the event I look forward to most. It’s away from the hubbub of 6th Street and, as many attendees reminded me, this is a party for adults. It’s just my speed: a little bit of free alcohol and a lot of talent gracing the stage outside of Threadgills.

I had just missed Yip Deceiver when I arrived. Dang. But, after I had gotten settled in, New Madrid brought their young-in-comparison faces to the outdoor stage and played a brief, but still solid set. The band seems more in its element in environs like the hazy 40 Watt, but they made more than a few fans at the party, I am sure of it. The baton was passed to Ruby the RabbiFoot, whose drummer, Jeremy Wheatley, was noticeably absent. Even still, Ruby’s songs held up without percussion, which is no easy task. Her songs swing on the power-pop continuum, but it’s perfect music for an afternoon in the sunshine. Mark my words: Ruby’s forthcoming record will be your soundtrack to the summer.

After a quick sound check, Chris Masterson of The Mastersons said, “We’re The Mastersons. We’ve got 20 minutes to make you love us.” It took only one song. The duo that serves as Steve Earle’s backing band served up its own sweet harmonies for the ever-growing crowd. Chris and Eleanor wasted no time getting to songs that will be included on their forthcoming New West release, so I was pleased to hear what they have in store for us. The title track, “Good Luck Charm,” sounded especially polished, a song written in solidarity with women in Texas dealing with oppressive legislation over reproductive rights. It wasn’t heavy-handed, either; this is what meaningful, timely songs are supposed to sound like.

After the Mastersons hopped off stage, Howe Gelb played his rugged and beatiful songs to a capitvated crowd. I mentioned after his set that I had recently spoken to Scott Baxendale (who will soon be profiled on Behind the Scene) about the guitar Gelb recently bought from him. He seemed pleased that someone was noticing his guitar sound, which, I may add, was excellent.

Robert Ellis was up next, and there’s little doubt that many of the folks that showed up at the day party were there to see him. His ’70s-inspired country-rock is really something to behold. Ellis’ band absolutely smokes, due in no small part to his badass pedal steel player. Ellis’ songs are great in their own right, don’t get me wrong, but the accompaniment puts him over the top. At one point, he and his hired guns played a freaked-out acid jazz interlude. “A country band doing acid jazz?” you ask. Yes. And it is killer.

While I have a minute, the wait staff at Threadgills is also incredibly nice. If you are in Austin or travel there, make it a point to check out this spot. Great food, impeccable service. Not only did the hostess find me a spot where I could give my phone and tablet a charge, but my server was kind enough to tell me that he’d have a look at Flagpole‘s SXSW coverage.

The Whigs kicked off their set with a new song that had a blistered, battered-up punk sound. Nice work by our hometown boys. I dare say it might be the best work from them yet. I’m also pleased to report that while Parker, Julian and Tim now reside in Nashville, they proudly proclaimed that they were from Athens a a few times during their set. The title track from their forthcoming album, Modern Creation, is where it’s at, y’all. The lyric in the song about “radical mutation” is definitely reflective of their new sound. It hits really, really hard.

Lucky for me, they also played my favorite track from their sophomore record, Mission Control, “Right Hand on My Heart,” in the later part of their much-too-short set. Say what you will about garage-rock bands, but I predict that the band’s new record will throw a much-needed monkey wrench in the genre. Call it prophecy, but Modern Creation will kick up a lot of dust when it drops in April.