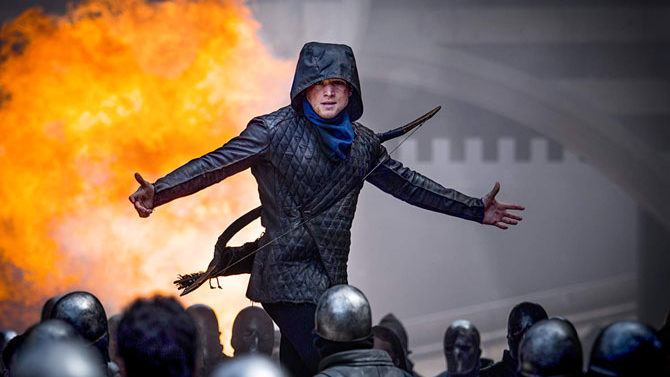 Robin Hood has been brought to the big screen a lot. This most recent movie is the fourth version of the famously altruistic criminal since 1991’s Robin Hood: Prince of Thieves featured an accent-less Kevin Costner. I had forgotten that, only eight years ago, Russell Crowe starred in Ridley Scott’s attempt to make a historically accurate Robin Hood. How did Guy Ritchie miss out on completing a British hero hat trick—Robin Hood, a classic OG, would have been a more natural fit for the RocknRolla director than King Arthur—in lieu of unknown Otto Bathurst (some eps of “Peaky Blinders” and “Black Mirror”) for the latest, slightest version of Robin of Loxley, Lord of Nottingham?

After being drafted into the Crusades, Robin (Taron Egerton) returns to Nottingham to find his woman, Marian (Eve Hewson, most recognizable from Steven Soderbergh’s Showtime period drama “The Knick”), with a politically ambitious new man, Will Scarlet (Jamie Dornan). Thanks to a training montage with a one-handed Muslim warrior whose name translates to John (Jamie Foxx), Robin plots to take down the dastardly sheriff of Nottingham (Ben Mendelsohn, who, despite being the current bad guy du jour, is still no Alan Rickman).

Egerton is the 27th actor to portray Robin Hood—a number that does not include three voice actors—and he definitely will not be the last. Writers Ben Chandler and David James Kelly may have written their Robin Hood with franchise aspirations, but these dreams are dashed by a predictable action movie that mistakenly believes itself to be a fresh take on this well-trod material. Maybe if Foxx had been unleashed as Robin, this old tale might have found something fresh to say. All this movie adds to Robin’s quiver are some cool new archery skills.