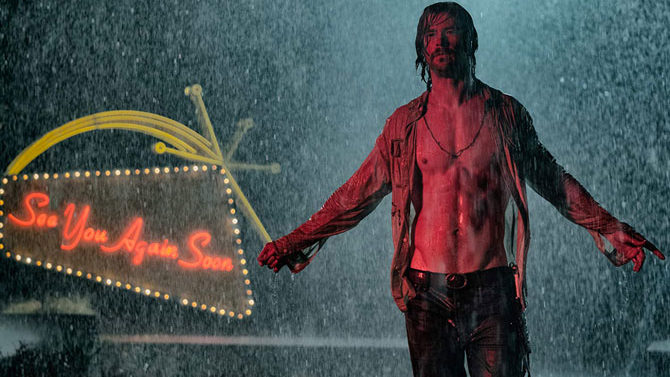 No one would be surprised to discover writer-director Drew Goddard cut his teeth on the independent cinema of the 1990s that was so heavily influenced by Quentin Tarantino and Pulp Fiction. Bad Times at the El Royale would have fit perfectly if Miramax—forgive the detestable name-dropping—had released it into cinemas in 1997.

As the optimism of the ’60s gives way to the ’70s, a quartet of strangers—Jeff Bridges, Cynthia Erivo, Dakota Johnson and Jon Hamm—seek accommodations at a once-hip hotel spanning the California-Nevada state line. Every guest checks into the El Royale, manned by a sole employee named Miles (Lewis Pullman), with their own mystery. These guarded patrons’ bad times only get worse when a Charles Manson proxy named Billy Lee (Chris Hemsworth) shows up with murder on his mind.

Though these Bad Times may be a tad too predictable—one minor surprise awaits in the third act—the movie successfully establishes the pedigree of its QT homage despite its lack of an acting reclamation project, while remaining entertaining until its credits roll nearly 15 minutes past the two-hour mark.