The Killing of a Sacred Deer Review 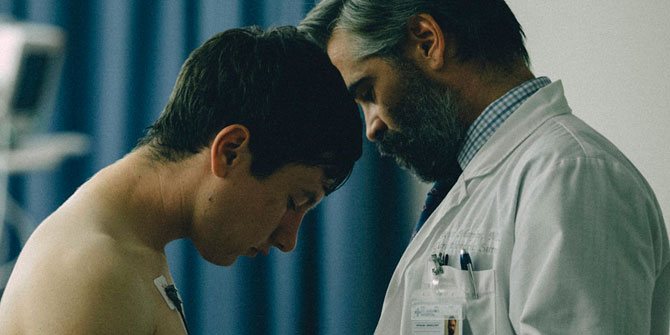 The Lobster filmmaker Yorgos Lanthimos does not quite capture lightning in a bottle with his follow-up, a Michael Haneke-ish morality play. Heart surgeon Steven Murphy (Colin Farrell) has an odd relationship with Martin (Barry Keoghan, Dunkirk), a teenage boy without a father. As we later learn, Martin lost his dad during a heart surgery performed by Steven, and this tragedy leads Steven to his own version of Sophie’s choice.

While technically brilliant, The Killing of a Sacred Deer suffers from a tonal lack of confidence. The movie knows it is not a comedy, but cannot quite commit to any other potential genre. The oddly formal, nearly stodgy dialogue read by Farrell, Keoghan, Nicole Kidman (as Steven’s suffering wife) and Bill Camp (as another doctor), as well as Raffey Cassidy and Sunny Suljic as Steven and Anna’s mysteriously ailing children, stalls the initial connection between audience and character. Despite its top-notch performances, The Killing of a Sacred Deer ultimately comes off like Blindness, which struggled to visualize its own moral struggle.

As expectedly pretentious as its title would imply, The Killing of a Sacred Deer does generate enough tension, terror and moral quandaries to justify the time taken to engage with it. It forebodes with a plethora of awkward overhead shots and an aggressively cacophonous score, until you realize its absurdity is funny. Both of Lanthimos’ last two films are knowingly superb; The Lobster just fits his blueprint better.