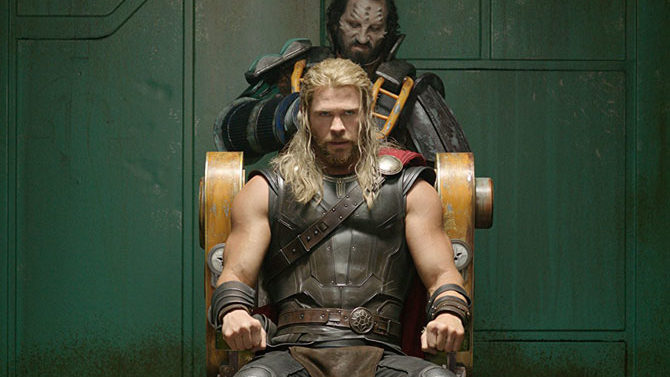 Thor’s solo adventures have been solid. Kenneth Branagh imbued the first with Shakespearean comedy borne out of a human god of thunder’s hubris. The Dark World is unmemorable at worst. (It was dark, right?) Then Ragnarok bursts onto the screen like a candy-colored comedy more in the vein of Guardians of the Galaxy than Avengers: Age of Ultron. Still, more than any other film featuring Asgard’s mighty warrior, Ragnarok gets that Thor (Chris Hemsworth) is a badass and unleashes him to smite his foes with Mjolnir from the get-go.

Though filled with action and CGI—like one would expect from a Marvel movie set on another planet/realm/dimension—Ragnarok may excel best at being a riotous comedy. Taika Waititi, the acclaimed New Zealand director of the indie comedies What We Do in the Shadows and Hunt for the Wilderpeople (your homework has been assigned; you will not be disappointed) has no trouble helming a major blockbuster. Thor was already one of the more appealing heroes in the MCU thanks to Hemsworth’s heady charisma; now he is one of the funniest, thanks to this cool, confident, comedic adventure.

Many superhero movies struggle to generate dramatic tension with their hero’s inherent invulnerability to the point that the superhero’s powers are so watered down as to make them merely heroes (see Wolverine in most X-Men movies). As powerful as Thor is, Cate Blanchett’s Hela, the Goddess of Death, seems destined to easily best him alone; good thing he’s got Hulk and a Valkyrie (Tessa Thompson) on his team. Even Tom Hiddleston’s god of mischief, Loki, is more help than hindrance—or is he?

Avengers already proved the potency of the Thor-Hulk duo; Ragnarok smartly takes further advantage of these characters’ brilliant on-screen chemistry and blasts through the MCU with enough good-natured humor to challenge Guardians, Vol. 1 for the title of MFP (most fun picture), while finding plenty of hammer time and smashing for Thor and Hulk, respectively.