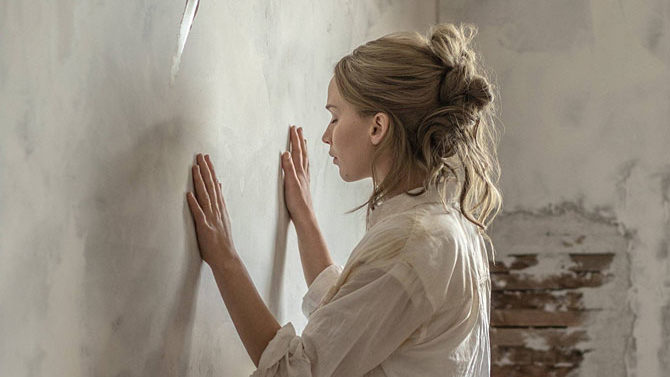 Even the weakest of Darren Aronofsky’s films provides innumerable cinematic joys and moments of superior filmmaking to justify at least a single viewing. Mother! strives to provide the sort of shocking cinematic experience that made Jodorowsky a cult figure, if not quite a household name.

Jennifer Lawrence radiates beauty, sensuality, frustration, motherliness—you name it—as the nameless protagonist, a young woman struggling to build a home in the wilderness with her older poet husband (Javier Bardem). The arrival of a stranger (Ed Harris) who claims to be a new doctor at the nearby hospital further strains the couple’s bonds, especially after his wife (Michelle Pfeiffer) and feuding grown children (the Gleeson boys, both Domhnall and Brian), arrive and start literally tearing the house apart.

Up to this point, Mother!’s chilly narrative is fractured but intact. The rest of the film devolves into a destructive allegory that even Chuck Palahniuk could find excessive. (Mother! would make a nice audition reel if Aronofsky ever desired to adapt a work by the Fight Club author.) The tremendous work done by Lawrence and the balletic cinematography of Aronofsky and longtime collaborator Matthew Libatique help salvage Mother! from some of its self-imposed tedium; however, the “F” from Cinemascore shows a film struggling to find its audience. Bardem even suffers as the distant hubby more defined by cliché than script. The quieter early act, in which Aronofsky builds an odd tension not unlike what discomforts in a Michael Haneke film, is far more disquieting than the combative cacophony into which events degenerate.