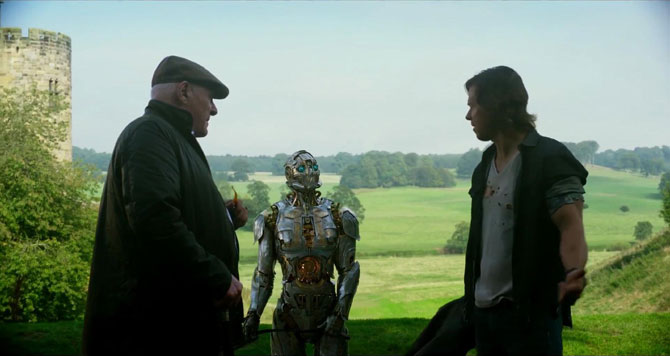 My relationship with Michael Bay’s Transformers franchise is complicated. Having grown up a huge fan of these alien robots in disguise, my excitement for the first movie overshadowed any doubts about the narrative. Let’s face it: It is a series of films based on a popular toy line owned by Hasbro. Still, the first movie established the franchise’s strengths (don’t be petty; it has a few) and multitude of weaknesses (no, I’m not talking about Shia LeBeouf).

No one expected the ugly turn of Transformers 2 (né Revenge of the Fallen), with its racist caricatures and pair of wrecking balls clanging between Devastator’s legs. Transformers 3 (Dark of the Moon) saw Optimus Prime turned into a jingoistic psychopath. Transformers 4 (Age of Extinction) finally introduced the beloved Dinobots (me love Grimlock!) after two-plus hours of exhausting robot action; their entertaining entrance could do nothing to save the grueling spectacle that preceded it. Worst of all, the three sequels were so physically and mentally brutal they left me with a headache. I felt not so much entertained as roughed up.

Transformers: The Last Knight, hereafter known as Transformers 5, actually winds up as the most entertaining (and shortest!) entry since 2007’s first movie. Its unnecessarily convoluted mess of a plot involves Optimus Prime (still voiced by the original cartoon’s Peter Cullen, which remains the key reason Bay’s bloated opuses capture any of the magic of their ’80s source material) returning to his devastated home planet of Cybertron. In the absence of Prime and his Decepticon nemesis, Megatron (v. Frank Welker, the cartoon legend who also originally voiced the character), the Transformers are running amok on Earth.

Humanity has formed the Transformers Reaction Force (TRF) in response to what it now views as the Transformers threat. They even have bipedal mechs they apparently stole directly from “Metal Gear Solid 5.” A few humans, like Mark Wahlberg’s Cade Yeager, still stand with courageous Autobots like the still-voiceless Bumblebee. Meanwhile, Optimus Prime has hooked up with an evil Cybertronian sorceress named Quintessa, who dubs him Nemesis Prime, and sends him and the entire planet on a collision course with Earth, which must be sucked dry in order for Cybertron to be reborn, naturally.

I forgot to mention the completely loopy and kickass opening, where Merlin (Stanley Tucci) uses Transformer “magic” and a giant robotic dragon to help King Arthur (Liam Garrigan) and his Knights of the Round Table defend England from some barbarian invaders. How could I forget that sequence, one of the franchise’s best? It’s like I buried the lede. Also, a brief foray into World War II proposes a terrific Nazi-fighting adventure.

Transformers 5 has not transformed from a Michael Bay film—respect him or not, he has auteurist tendencies (no one loves the magic hour as much!)—but at least this time it’s an acceptably entertaining experience, rather than an arduous one. The franchise has also boasted some of the most intricate production design ever witnessed. All the moving parts make the transformation sequences truly amazing to behold. Were Bay only even remotely as concerned with character or dialogue as he is CGI bells and whistles. For everything it does better than its predecessors, Transformers 5 still has a screenplay that punctuates far too many lines with a repugnant “bitch.” And Bay’s idea of restraint is to have his team of editors (six!) chop up and out scenes until the setup for the last act is unbelievably confusing.

While the human element matters little, Anthony Hopkins has a wild ball as the last remaining member of an organization known as the Witwiccans. (Yes, they do acknowledge a connection to LaBeouf’s Sam Witwicky.) He even says “dude.” But he does not seem to understand what a paycheck performance is. The Oscar winner gives his all, especially when interacting with his sociopathic butler-bot, knowingly voiced by Jim Carter, or Carson from “Downton Abbey.” This franchise has boasted several scenery-chewing turns from respected thespians—John Turturro is still hungrily hanging around, after all. But Hopkins’ is the most thoroughly mad, and will make Buzzfeed-type lists for years to come.

No one needs to be convinced to see Transformers 5. You either will, or you won’t. And while Bay overemphasizes technical proficiency over well-rounded filmmaking once again—go back and watch Pain & Gain for the worst example of the auteur’s self-indulgence getting in the way of a good movie—it dials down the bombast enough to provide a solid summer blockbuster with more entertainment value than its immediate predecessors. You can thank Sir Anthony Hopkins for that.