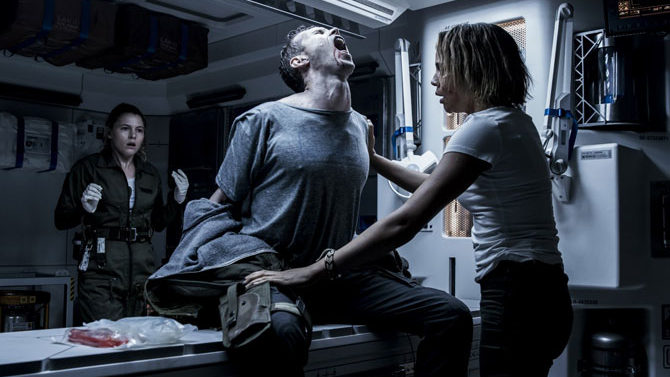 Alien: Covenant simultaneously bridges the Prometheus/Alien divide and acts like a slate-clearing mea culpa for its maligned predecessor. I am not going to bag on Prometheus, a film about which I remember very little (which may be the most damning criticism I can levy about the Alien pseudo-prequel), but Alien: Covenant will please fans in the exact ways the former film did not.

After opening with an unoriginal accident that awakens the crew of a colonizing vessel, director Ridley Scott’s latest entry in the beloved franchise lands on a beautiful, hostile world just ready to impregnate these new unsuspecting hosts with some nasty xenomorphs. Michael Fassbender continues as the new face of the franchise. His David captures the creepiness of Alien’s Ash; his Walter fulfills the protective promise of Bishop from Aliens.

The rest of the endangered crew exists mainly to be food for the beast. Outside of Katherine Waterston, whose Daniels is a perfectly acceptable Ripley proxy, no new character stands out besides Danny McBride’s affable pilot, Tennessee. The mythology may be getting too complex; the original’s elegance lies somewhat in its slasher simplicity. It’s And Then There Were None… IN SPACE! Fortunately, amidst all the Prometheus-style philosophizing, Alien: Covenant reminds us just how terrifying a facehugger laying an egg in your chest can be.