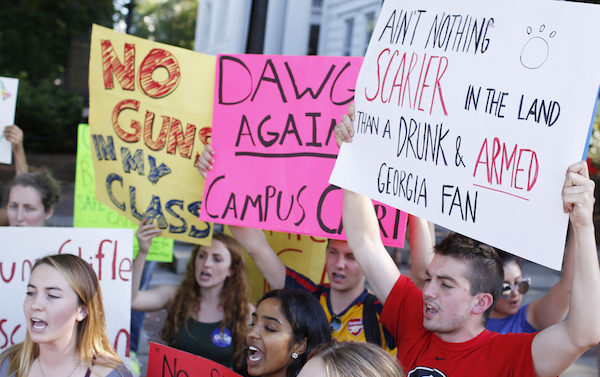 Campus-carry protesters at The Arch in May.

But the law was written in such a way that it left much ambiguity about where, exactly, on campus guns are allowed, and when. Wrigley and university system lawyers attempted to offer some clarity.

Journalism professor Barry Hollander was kind enough to post the full email, but here are some highlights.

• Some had interpreted “athletic events” to include tailgating areas, but the USG doesn’t see it that way. Football fans can bring their guns onto campus on game days, as long as they don’t take them into Sanford Stadium. The exception applies only to the venue itself.

• The exception for fraternity and sorority houses only covers those on property leased or owned by the university. So Greek organizations with off-campus houses could opt to allow guns inside.

• The exception for offices does not extend to hallways or waiting areas around those offices, where guns will be allowed.

• Only handguns are allowed, and they must be at least partially concealed underneath clothing.

• UGA will not provide gun lockers, nor post signage outside areas where guns are restricted. It’s gun owners’ responsibility to know the law and follow it.