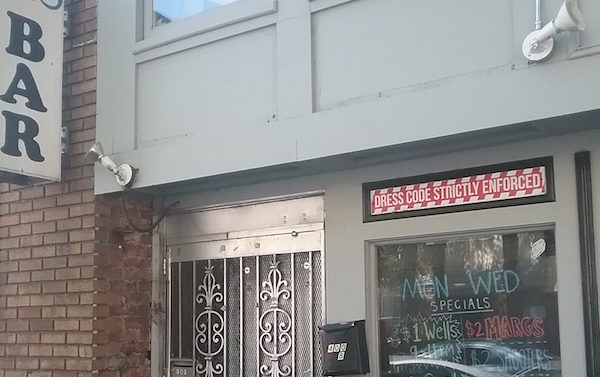 
A photo of 9d’s, presented by lawyer Ken Dious as evidence that the bar did not post its dress code as required by law.

A Statham African-American man is the first person to file a formal complaint under a new Athens-Clarke County law prohibiting bars from discriminating against patrons on the basis of race.

Kendrick Bullock and his brother, Broderick Flanigan, a well-known Athens artist and political activist, went downtown the night of Apr. 1 to watch a basketball game. Afterward, they decided to go to 9d’s, a Clayton Street bar.

According to Flanigan, the rest of the group entered the bar but discovered Bullock was not with them. Flanigan went back outside, and found that doormen had denied Bullock entry on the grounds that his saggy pants violated the 9d’s dress code.

As Flanigan points out in a video posted on the Athens Anti-Discrimination Movement website, the dress code was not posted outside as required by law. They also disputed whether Bullock’s pants were actually sagging.

Ryan Heron, a lawyer representing Bullock, along with veteran civil rights attorney Ken Dious, called the incident “an example of what to do if you want to violate the discrimination ordinance.”

It’s just one of many reports of discrimination at downtown bars—especially those east of College Avenue—the AADM has received, but it’s the first time a victim has been willing to file a formal complaint, because many don’t know the law is in place or believe that nothing will come of it, Heron said.

“It’s been unaddressed for too long, and something needs to be done,” Bullock said. “That’s all I have to say, really.”

College-oriented bars on the east side of downtown came under scrutiny in 2015, when it came to light that the Confederate-themed bar General Beauregard’s served a watermelon shot called a “N*****rita,” sparking local and national outrage.

Flagpole interviewed several minority UGA students who shared stories of being discriminated against, and the UGA Student Government Association collected dozens of similar allegations, including a few against 9d’s.

“They create these certain invisible barriers,” Flanigan said. “As you can see in the video, they keep people out of certain spaces or places. What it does is it chips away at the morality of the community.”

The Athens-Clarke County Commission passed the anti-discrimination ordinance in November. It prohibits bars from discriminating, and requires them to post their dress code (if they have one) outside and to enforce it across the board, rather than selectively. Bars also have to keep records of private events. Numerous reports indicate that bars have used dress codes and made up fake private events to keep out minorities.

“I don’t care what your rules are,” said Mokah Jasmine Johnson, co-founder of the AADM. “Your rules are supposed to apply to everybody… not just selected people.”

The law also requires ACC staff to present a framework by June 30 for a local civil rights committee to field complaints, but until then, the AADM is offering legal advice to anyone who wants to file a complaint.

9d’s owner Mark Bell said he wasn’t aware of the complaint when Flagpole reached him this afternoon. That’s not unusual, according to ACC Attorney Bill Berryman, who prosecutes alcohol violations. Bars are usually notified once the attorney’s office completes its investigation, which in this case should be next week, he said.

Bell’s defense is that he didn’t know when the law took effect. He said he contacted the county attorney’s office about the omission but never received a response about when the sign must be posted.

A memo sent to bar owners along with applications to renew their alcohol licenses does not list a date. But all ordinances take effect immediately once they’re passed by the commission and signed by the mayor, and the wording of the memo should have made it clear that the ordinance was already in effect, Berryman said.

A police officer was checking bars for compliance on Saturday, so on Monday, Bell said he contacted a shop to make a sign. It should be ready Thursday or Friday, he said.

“Yes, if their pants were too saggy, that is part of our dress code,” Bell said. Sideways baseball caps, long chains, camouflage clothing, neck and face tattoos, baggy all-black or all-white T-shirts, bandanas and doo rags are banned as well, he said. The dress code is meant to keep out gang members regardless of race, he said.

Like other alcohol violations, such as selling to minors, the judicial procedure is a civil one, not criminal. If Berryman decides the evidence is strong enough to move forward, Bell will be summoned for an initial appearance before an administrative officer (the Municipal Court judge) likely in early July, Berryman said. At that point, the two sides are able to reach a resolution 90 percent of the time, he said. If not, an evidentiary hearing will be held the following month.

Any bar that violates the discrimination ordinance could have its alcohol licenses suspended or revoked, and could be fined up to $1,000.

“We will thoroughly and quickly investigate it, and take it where it leads us,” Berryman said.

The complainants have not decided whether to file a federal lawsuit in addition to the local complaint, Dious said, although he added that “there’s no question” 9d’s violated the Civil Rights Act of 1964, which prohibits discrimination at “public accomodations” like bars, restaurants and hotels.

Dious also speculated that the local ordinance might be challenged in court.

“We will take this case wherever it needs to go,” he said. “If it needs to go to the 11th Circuit [Court of Appeals] or to the Supreme Court, we’ll take it.