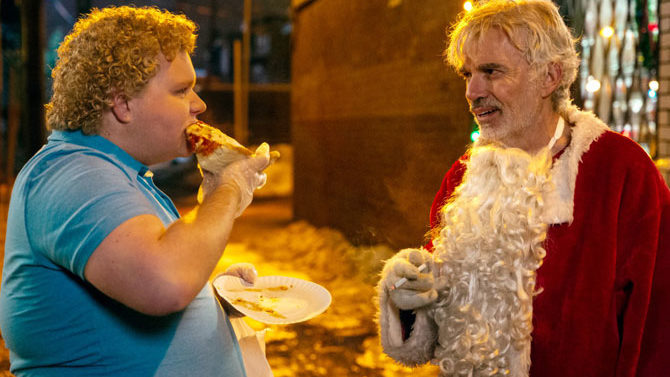 Thirteen years later, Billy Bob Thornton returns as Willie Soke, and the results are more coal than candy. I am not sure what audiences did so wrong to deserve this terrible sequel, other than see the first flick in such large numbers. That 2003 comedy had Terry Zwigoff’s impish eye and dash of heart. Bad Santa 2 is all greed, except for Brett Kelly’s Thurman Merman, a twinkling holiday light in the middle of this movie’s jet-black soul.

The plot reunites Willie and his elf partner Marcus (Tony Cole) for a Chicago heist planned by Willie’s bad mama (Kathy Bates—the genius of her casting is also the extent of the movie’s creativity). Their mark is a charity run by a skeezy character played by Ryan Hansen (poor dude better get used to being typecast as “Veronica Mars’” Dick Casablancas for the rest of his career) and his pretty wife (Christina Hendricks, in a downgrade from Joan on “Mad Men”), who is so sex-starved she unbelievably falls for Willie’s booze-soaked charm. You’re better off staying home and watching the first one on your DVR; Bad Santa 2 is too naughty to be nice… or funny.