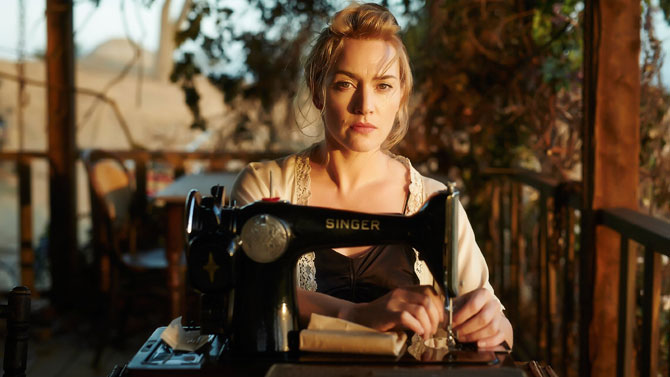 Jocelyn Moorhouse directs her first film since 1997’s A Thousand Acres in this lively adaptation of Rosalie Ham’s novel. Moorhouse cowrote the script with her husband P.J. Hogan, who gave us an excellent version of Peter Pan. Dressed up like a fashion-forward, feminist Western, The Dressmaker’s flaws lie in the plot, presumably provided by the novel, not in the film’s execution.

Myrtle “Tilly” Dunnage (Kate Winslet) was sent away as a child after the death of a classmate. Years later, she returns to care for her shut-in mother, Molly (the great Judy Davis), and clothe the small-minded women of tiny Dungatar, Australia in beautiful bespoke outfits. She also falls for a rugged local boy, Teddy McSwiney (Liam Hemsworth).

The Dressmaker is a morality play about small town prejudice that takes a dark dramatic left in act three; the silly, fun antics and romance that dominate the film deserve better. So do Winslet and especially Hemsworth, who shows a lot more wit and charm than he was able to muster in the grimmer Hunger Games.

Davis steals much of the movie, as should be expected, and Hugo Weaving reminds us of the incredible The Adventures of Priscilla, Queen of the Desert, as the cross-dressing local policeman, Sergeant Farrat. Unfortunately, those miserable, unnecessary late film plot twists turn this sweet, quirky Aussie comedy into a much darker, depressing film. If you can forgive its narrative shortcomings, you will be rewarded by beautiful costumes and even more gorgeous acting. But be warned: That plot twist is a film ruiner.