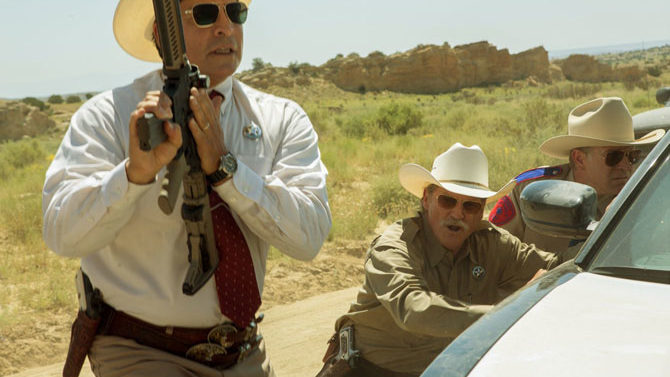 The summer movie season ends with a bang as David MacKenzie’s Hell or High Water finally hits Athens. Two brothers, Toby and Tanner Howard (Chris Pine and Ben Foster), hatch a plan to rob several West Texas banks in order to buy back the family farm from the very same bank. But they only have a week to stave off foreclosure and benefit from the oil recently discovered on their land. They also have to outwit Texas Ranger Marcus Hamilton (Jeff Bridges), who, like every other movie cop, is on the verge of retirement. In another round of David vs. Goliath, it is easy to root for the Howard boys, even if Tanner is one couch trip away from being ruled a psychopath.

“Sons of Anarchy” actor Taylor Sheridan (he played Deputy Chief David Hale) follows up his excellent but murky Sicario script with this modern-Western crackerjack-heist hybrid. Pulling for the little guy is always easy, but in today’s constant economic crisis, the 1 percent, even when it is represented by “Small Wonder”’s Dick Christie, looks more evil than ever. (Isn’t that half the success of “Mr. Robot?”) Toss in a haunted, sad Captain Kirk, hoping to carve out a better life for his boys—one free from the sickness of poverty, as he puts it—and empathy is bound to go through the roof.

Pine may anchor the film, but Foster is a pistol of a performer who grows more daring in each appearance. His ex-con sets his younger brother’s robbery plan in motion, and Foster makes sure no one forgets it. Bridges may be playing his umpteenth cowboy, little different from Crazy Heart’s Bad Blake, Rooster Cogburn or R.I.P.D.’s Roy, but he does this routine so well.

Such surprising beauty exists in Hell or High Water. MacKenzie finds it in the sparse West Texas landscape. Sheridan finds it in an economic downturn. Pine, Foster and Bridges find it in the character, honor and brotherhood of a reluctant outlaw, an impulsive hothead and a lawman. See this movie come… you know the rest.