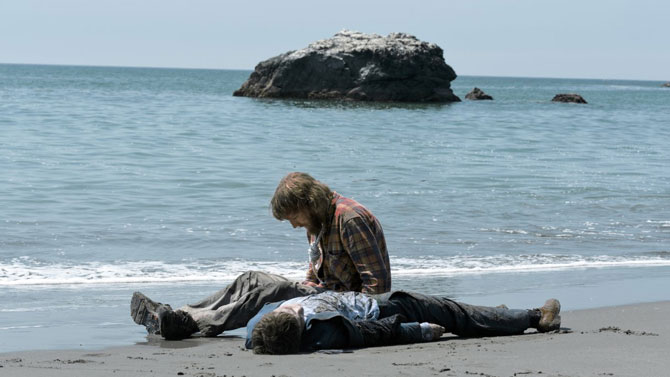 Talk about a movie that subverts expectations. Swiss Army Man, from the Daniels (writers-directors Dan Kwan and Daniel Scheinert won Sundance’s directing award), does not ever do what one expects, especially when it comes to explaining how a guy marooned on an island can talk to a farting corpse. If you saw Castaway and thought it needed more flatulence, preferably from Wilson, Swiss Army Man should fulfill expectations.

All alone on an island, not-Charlie-Huston’s Hank Thompson (Paul Dano) is about to commit suicide when he notices a corpse he eventually names Manny (Daniel Radcliffe). With the multipurpose tools provided by Manny, Hank escapes the island (pretty quickly, actually) and builds an entire fake life in the woods. The film even sticks the third-act landing, when many high-concept indie films of the past have faded to black and the end credits.

Swiss Army Man is pretty much a two-man show, and fortunately, it has the right duo. Dano specializes in the weird, almost creepy boy next door; what roles he takes as he ages will be interesting. Radcliffe explodes in this film as the oddly charismatic Manny, a corpse filled with childlike naiveté and its requisite never-ending questions, especially where sex is concerned. The multiple masturbation conversations are surprising and hilarious. Radcliffe is genuinely infectious, and the film is better for it. A more original film will be hard to find this year, and as a result Swiss Army Man is not to everyone’s tastes. But if you were not immediately turned off by the notion of a talking, farting corpse, give this winning tale a try.