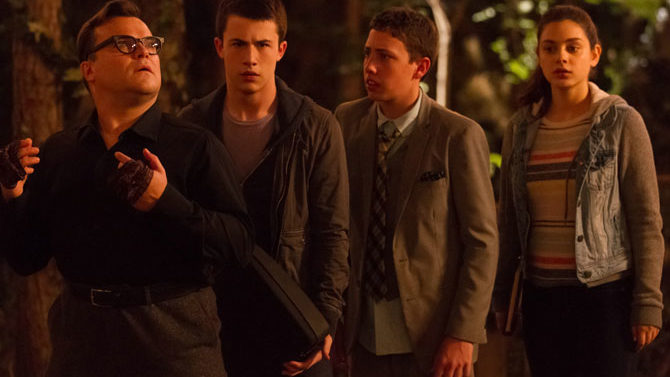 Having already started reading adult horror like Stephen King, I missed the Goosebumps revolution and was too old for author R.L. Stine’s line of older teen horror, Fear Street. The movie version of Stine’s kiddie horror series, in which classic characters like evil ventriloquist dummy Slappy are brought to life by Jack Black (he plays Stine), is analogous to scary kids’ movies of my youth like Monster Squad or Gremlins. The mayhem wrought in Madison, DE by Stine’s many monsters is very similar to that wrought upon Bedford Falls by the gremlins. However, Goosebumps is nowhere near as truly terrifying.

The movie manufactures several scares without ever being too scary. A floating, red-eyed poodle and a romp through a ghoul-filled graveyard are the movie’s most frightening set pieces, though neither lasts very long. Kudos to director Rob Letterman (Jack Black’s Gulliver’s Travels) and screenwriter Darren Lemke (Jack the Giant Slayer) for finding some scary while keeping it safe. The humans—Black, Dylan Minnette, Odeya Rush, Ryan Lee, Amy Ryan and Jillian Bell—seem to be enjoying more than the paycheck, though Ken Marino is so wasted as to make me wonder why he was cast. Family-friendly scary movies are a staple of this season. Like Jason Voorhees, Goosebumps is bound to come back to life year after year after year.