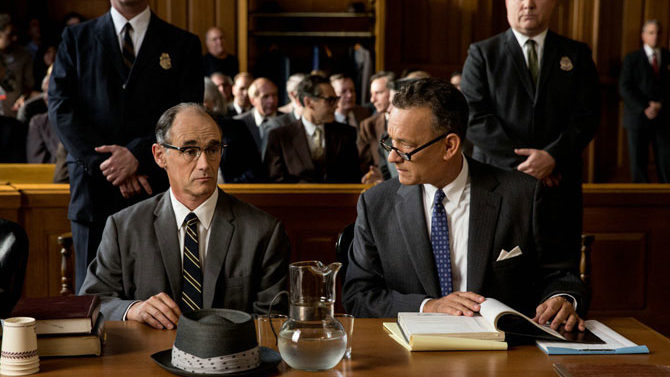 The latest American history lesson from Steven Spielberg and regular collaborator Tom Hanks offers audiences a fascinating, untold true story. An American lawyer named James Donovan (Hanks) was thrust into the middle of the Cold War when he was requested to defend an alleged Soviet spy, Rudolf Abel (acclaimed stage actor Mark Rylance). After the trial was over, Donovan engaged in spycraft to arrange the prisoner exchange of Abel and a downed U2 pilot, Francis Gary Powers (Austin Stowell).

In his first film since 2012’s Lincoln, Spielberg may have delivered his most entertaining history lesson yet with this combination of le Carré spy games and a nuanced recreation of the nuclear-frightened ‘50s. The film may lack the consequence of his historical masterpieces, like Schindler’s List, Saving Private Ryan or Lincoln, but the legendary filmmaker simply excels in the realm of populist entertainment that is exemplified by Bridge of Spies. Hanks is in his comfort zone as the ideal American, fighting for the Constitution and the little man against bigotry and communism.

Some, and maybe a lot, of Bridge of Spies’ amusement must be attributed to the script, co-written by Joel and Ethan Coen. Spielberg typically surrounds himself with exceptional collaborators, like cinematographer Janusz Kaminski and composer Thomas Newman, but the addition of such worthy writing contributors raises what appears to be an underwhelming Spielberg film into the rare underrated one. Do not let its lack of award-winning appearances deter you from seeing what is sure to be one of 2015’s most satisfying adult adventures.