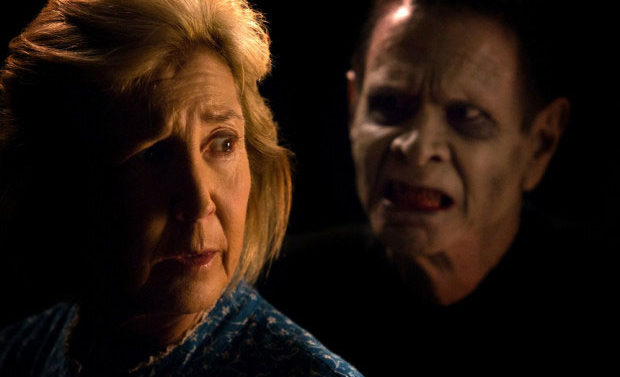 A huge step up from Insidious: Chapter 2, the third Insidious returns more to the formula of the first entry. Slow, steady real-world terror builds up to a trip into the Further, this time with psychic Elise (Lin Shaye) kicking ass and chewing bubblegum.

Before the Lambert family was terrorized by some old lady spirit that looked like Darth Maul, a pretty teenager named Quinn Brenner (Stefanie Scott—soon to be seen as Kimber in the awful-looking, childhood-destroying Jem and the Holograms movie) piques the interest of an evil entity while trying to contact her recently deceased mother. Fortunately, Elise agrees to kick some astral-projection butt. Seriously, the last act is the series’ best journey into the Further; it’s reminiscent of the more action-oriented dream sequences in the excellent third Nightmare on Elm Street entry, Dream Warriors.

Saw scribe Leigh Whannell, who has written all three Insidious movies, hops into the director’s chair vacated by Furious 7 helmer James Wan with commendable results, though the appealing first act kind of screeches to a halt at the sound of someone’s not-quite-good-enough brakes before revving back up for that action-fueled last act.

I am not quite sure what is going on in this franchise (and I am certainly more excited for the Sinister sequel, whose predecessor is often confused with Insidious), and was anyone really that curious about how Elise met Tucker (Angus Sampson) and Specs (Whannell)? Oh yeah, Dermot Mulroney is unnecessarily present as Quinn’s clueless but ultimately caring dad. Nonetheless, it is hard to hate a movie with such spectacular use of some very Argento-nian and Carpenter-ian fonts.