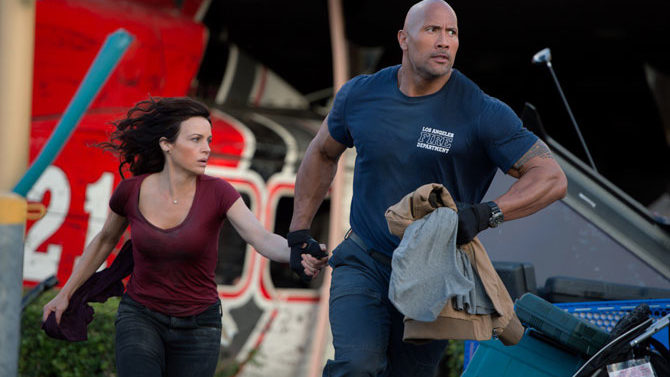 Though Dwayne “The Rock” Johnson does steal a truck, a plane and a boat, San Andreas is the strangest adaptation of Grand Theft Auto; it’s almost like the filmmakers had never played one of the games. Of course, I’m kidding, though Johnson would make a really good GTA movie protag.

San Andreas is the latest disaster movie not made by Irwin Allen or Roland Emmerich. After massive earthquakes rock the West Coast, an LAFD helicopter pilot (Johnson) must rescue his estranged wife (Carla Gugino) and daughter (Alexandra Daddario) from the wreckage. Not a moment of the movie surprises, but lowered expectations are hard to disappoint. Plus, Daddario is really pretty.

The movie would certainly have benefited from two things: more rescues and more washed up old stars. Johnson saves a mere five people. This flick should have been a live action version of Fisher Price’s Rescue Heroes, focused solely on the rescue efforts. Think of the built-in cross promotion. And what happened to the Earthquake/Towering Inferno/The Poseidon Adventure disaster heyday when any old Oscar winner and TV star could be endangered by a faked natural disaster?

San Andreas could use the jolt of fun provided by a few rounds of “Name that Old Star.” San Andreas is no disaster, but the Rock has cooked up better.