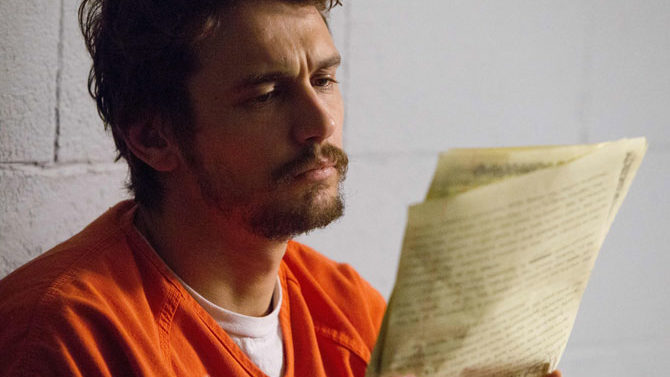 While everyone was looking for the next Gone Girl (Paula Hawkins’ The Girl on the Train is a strong candidate), “Serial” or “The Jinx,” Michael Finkel’s True Story was already lurking outside the window. The bulk of director Rupert Goold’s adaptation of Finkel’s memoir has the cold, dark feel of those popular worlds of mystery and sociopaths, lorded over by James Franco, who stars as Christian Longo. The seemingly mild mannered family man is accused of murdering his entire family, including three children.

When finally captured in Mexico, Longo is using the identity of disgraced New York Times reporter Michael Finkel (Jonah Hill), who is dealing with the aftermath of the revelation that he lied in one of his stories. Hoping Longo’s account of the murder is his big shot at redemption, Finkel begins an ever-deepening relationship with the accused killer, and questions soon rise as to who is using whom.

This extremely chilly movie really works, as the mystery builds. Did Longo do it? If not, who did? All giant eyes magnified by thick-rimmed glasses, Hill brings the proper amount of hesitation and ultimately enthusiasm to Finkel. What reporter would not want to be the one to uncover the truth of such a sensational case, especially if it means saving this odd man who has somehow become his friend?

If not for its factual origins, the Silence of the Lambs relationship between killer and protagonist could be ripped for its hackneyed overuse. The film does break from a rather formulaic mold, as Finkel never seems to try to investigate the case. Apparently, he does not want to solve it; he just wants to deliver the revelations.

Ultimately, the reveal is much less exciting than the mystery. True Story solidly builds up to nothing much, leaving the movie, when remembered, less satisfying than it was to be watched. It seems to promise a larger solution than exists to be exposed.

And who would have supposed Franco would be such a lackluster sociopath? From the first encounter, he is too off-kilter, like Vince Vaughn’s Norman Bates. Hill’s Finkel is the only person unaware he is being played for an unknown reason that never really pays off. As Finkel’s wife, Jill, recent Academy Award nominee Felicity Jones exists to do little more than fret, though. True Story lacks the revelatory bite of recent true (and fake) crime smashes but still pleases the inner Investigation Discovery viewer.