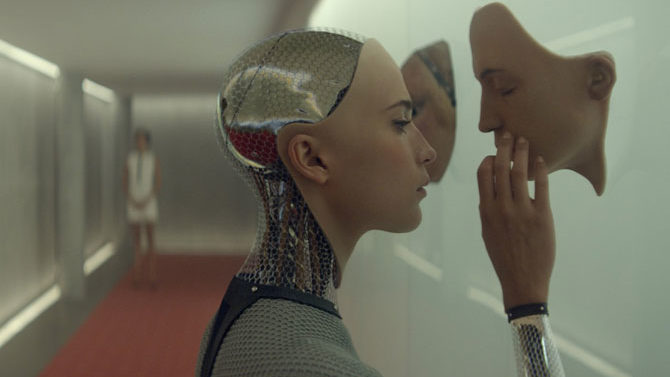 A week alone with one’s strange, weightlifting boss is a much less desirable prize than an egotistical billionaire might think. Fortunately (I guess), Caleb has really won the opportunity to take part in a Turing test that will perhaps find the humanity in Nathan’s AI breakthrough, Ava (Alicia Vikander).

Caleb rightfully becomes wary after a string of power outages leaves him trapped in his Spartan quarters and also allows Ava a few moments of unsupervised conversation, in which she reveals that Nathan may not have good intentions. Possibly, Caleb already knew that, because the audience members surely do.

Garland has constructed a fairly frightening, claustrophobic world in Nathan’s fortress. Nathan is as appropriately enigmatic and intimidating as the owner of said fortress should be. One wonders how many times it occurred to Caleb that he might not be leaving that house alive. Garland gives good dread and tension; see his excellent collaborations with Danny Boyle, 28 Days Later and the massively underrated Sunshine (The Beach is only OK but deserves revisiting). The set design is either starkly functional or gorgeously natural; Nathan’s estate is situated on a beautiful, secluded mountain.

A movie about testing, Ex Machina would fail were it not for Vikander’s assured AI, Ava. Strikingly attractive despite her close visual kinship with Robocop, Ava woos her tester, leaving him even less sure of her humanity. Does she really like him? Is she merely imitating emotional attachment? Is she manipulating him? Garland uses Vikander’s aura of innocence and Ava’s disarming fragility (her insides are visible!) to great advantage. Like Caleb, you want to fall for her, but should you?

For all the good qualities shared by heady science fiction, it most frustratingly lacks resolution. As question-filled as Ex Machina is, any fears of disappointment are allayed by a conclusion that is straightforward and open-ended. The film’s lingering queries will be dominated by debate over the morality of its science, not the structure of its narrative. Garland has always shown great promise; his thrilling, sci-fi debut behind the camera only increases the value of his creative intelligence.