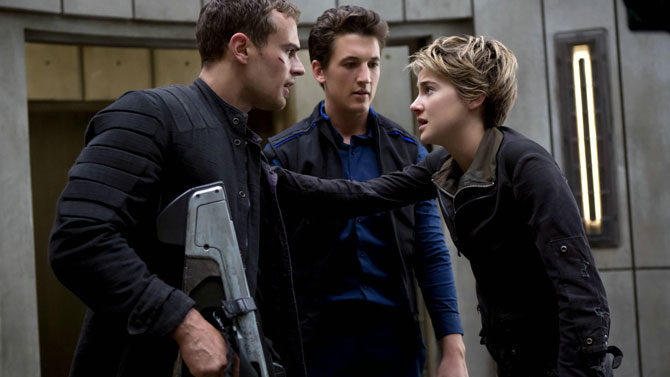 This sequel to Divergent is more casually and aggressively violent as Divergent fugitives Tris (Shailene Woodley) and Four (Theo James)—more like 40, am I right?—run from one Faction to the next. Their Dauntless and Erudite hunters (headed by Jai Courtney and Mekhi Phifer) are so stereotypically villainous they’re no fun. Then again, no character reacts like a normal person.

As created by Limitless’s Neil Burger, Divergent exceeded its novel-origins, but Burger handed the reins of the sequel over to Robert Schwentke, who should not have been on any producer’s radar after R.I.P.D. The world created in Insurgent feels incredibly artificial, and the talented actors, all seemingly miscast for prime name and facial recognition rather than appropriateness, do nothing to instill greater realism.

It’s like a parade of Woodley’s cinematic exes. Nothing about this dystopian Chicago feels natural. Unfortunately, it’s not even fun bad. The Factionless, led by Naomi Watts (another casting head-scratcher) are like some unintimidating outcasts from The Warriors who’ve seen West Side Story too many times and provide some giggles in an early train fight with Tris and Four.

The screenwriters did their best to trim up the final act, but their patch job immediately frayed. Any actors who got killed in this middle entry should thank their agents for getting them out early. Even the rather bland Maze Runner is better, and with Allegiant split into two entries (Why not? Every other series did it.), we have two more flicks to endure.