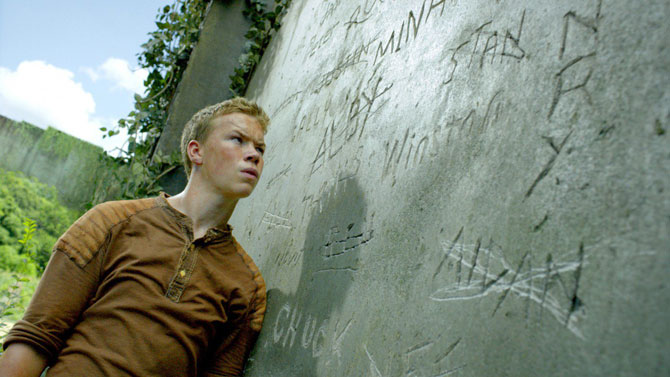 When Thomas (Dylan O’Brien, MTV’s popular “Teen Wolf”) awakens in an elevator speeding up into the unknown, he is greeted by a group of surly teens, led by Alby (Aml Ameen), Newt (Thomas Brodie-Sangster) and Gally (Will Poulter). Dismissed as a newly arrived “Greenie,” Thomas soon raises eyebrows, after surviving a night in the mysterious maze surrounding the Glade and killing one of the deadly Grievers that stalk the shifting passages.

First-time feature director Wes Ball adds no style or grace to this sci-fi mystery, and its lack of humor or fun makes the movie a real drag for anyone already privy to the secrets of the maze (i.e. anyone who read the book). It’s not hard to imagine the uninitiated sticking with this rather tedious teen flick to solve its mysteries; I finished the book for similar reasons. Nothing sets this young dystopia apart from its superior predecessors, The Hunger Games, Divergent and even The Giver.