Last week, Spotify published a study ranking the top 40 “most musical universities in America,” based on the number of students who signed up for the streaming service’s half-off student deal last semester. The University of Georgia barely made the cut, coming in at No. 40.

For each school, Spotify broke down its distinct listening characteristics, including the most-played artists and songs, peak listening hours and the times students went to bed and woke up, according to their streaming habits.

Among the revelations about UGA students: They really, really like Knoxville, TN-based roots-rock band The Dirty Guv’nahs, who came in at No. 1 on the “distinctive artists,” “popular artists” and “distinctive tracks” lists.

UGA students, as is the case with most of the top 40 schools, also tend to gravitate heavily toward centrist, chart-topping pop like Iggy Azalea, Drake, Calvin Harris and Ariana Grande, which begs the question of why they’re not just, y’know, listening to the radio. 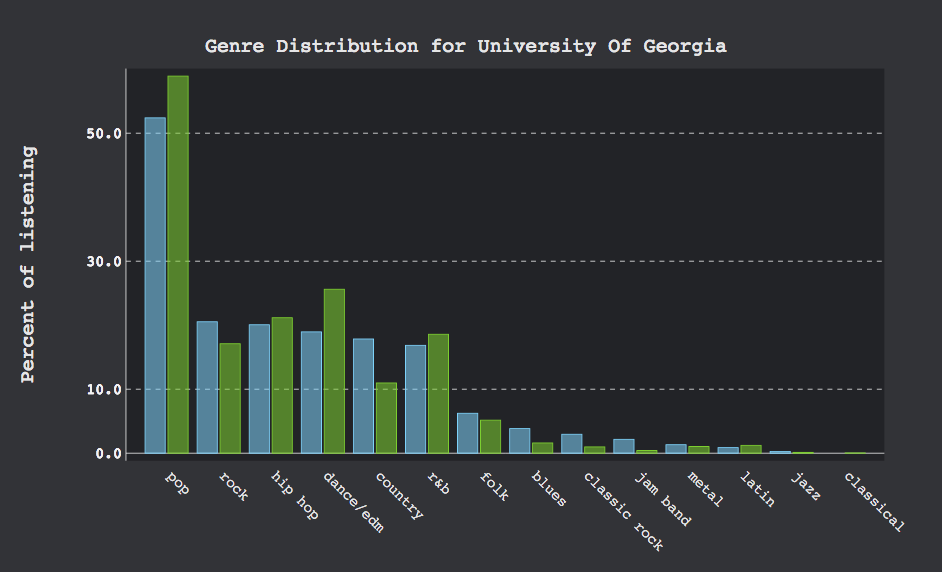 According to the study, UGA students go to bed earlier but wake up later than the average, clocking an impressive nine hours and 45 minutes of sleep per night.

Among the study’s other findings, according to the article:

Also worth noting: Georgia Tech students listen to a lot of Mumford & Sons, because haha of course they do.