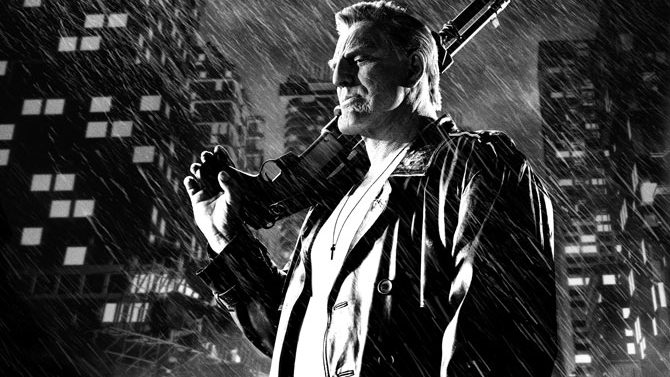 Sex. Violence. Anguish. Revenge. Heartbreak. The integral components of a great crime story. Sin City: A Dame to Kill For is not a great crime story, or stories as it may be, since the movie is comprised of separate vignettes like the original feature. But fans of the original movie, directed by Robert Rodriguez and Frank Miller, should find that the sequel fuels hardboiled desire.

Sin City: A Dame to Kill For should have been made years ago, since the startling style of the first installment was genuinely groundbreaking in its way and has gone on to inspire countless other movies, commercials and whatever else. Exploitation movies don’t exist in the same manner that they used to in the 1970s and 1980s, so there was something gleefully, aggressively profane in how Rodriguez and Miller cranked it out in 2005. These stories, however, are nothing new. The Sin City movies are based on Miller’s comic book series, centered around a mythic city of corruption and vice rather than a single continuing character. Heavily influenced by the right-wing crime writer Mickey Spillane, the Sin City series upholds the knuckle-dragging values of sex-obsessed thugs, dangerous dames and sadistic heavies greedy for more pain.

The original Sin City was startling in ways because the gleaming black and white style (with moments of ravishing color) was fresh to the eyes, even though the tale itself was weary and uninspiring. The deal’s the same here, although the visualizations feel too commonplace and Miller’s right-wing leanings and rampant misogyny (women are always damaged angels or cruel whores) lacks irony.

So why is this worth seeing? Because it’s true to itself and the Sadean universe of Sin City and its creator. And in that respect, Sin City: A Dame to Kill For has its perverse charms. It also has some fine performances, specifically from Mickey Rourke as Marv, reprising his role from the first movie, Eva Green, as the deliriously green-eyed vixen of the title, and the always underutilized Powers Boothe as a corrupt politician whom a wily cardshark, played by Joseph Gordon-Levitt, engages with in nasty fashion.

Sin City: A Dame to Kill For lacks sparks and Rodriguez proves more than ever that he’s a 12-year-old boy trapped in a man’s body. But fans of the original movie and the comic books will find this worthy of attention nevertheless. It’s all a bit toothless, but it still chomps.