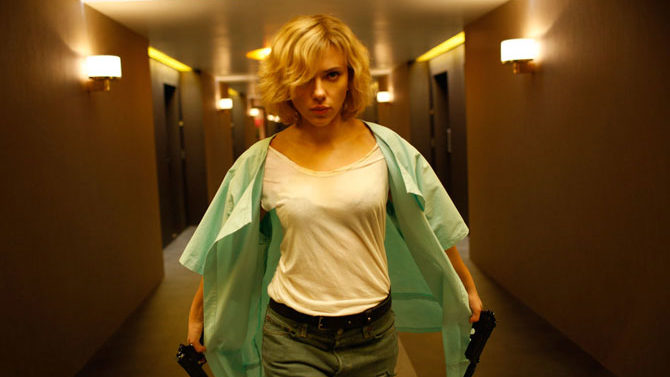 LUCY (R) Director/writer Luc Besson is a conundrum. Back in the 1980s, Besson was one of the leading filmmakers of the cinéma du look movement, which also included directors Jean-Jacques Beineix (Diva and Betty Blue) and Leos Carax (Mauvais Sang and The Lovers on the Bridge). Like those of his artistic compatriots, Besson’s movies were visually kinetic, dismissive of logic and wildly passionate. The movies were short on intelligence at times but always emotional and gorgeous to behold. Beineix’s Diva was a huge international success on the art house circuit in its day and Besson’s Subway and La Femme Nikita likewise hit big. While Beineix and Carax remained on the periphery of Hollywood success, Besson embraced working on bigger commercial movies for the major studios. But while his best work—La Femme Nikita, The Professional and The Fifth Element—is seductive with its vibrant style, strong female leads and ability to embrace and undermine cinema clichés, one has only to remember how easily Besson sabotaged himself. Think Chris Tucker’s arrival in the second half of the otherwise fantastic The Fifth Element, and see a movie go horribly wrong, almost to the point of ruining all the splendid moments that came before.

Besson has been relatively low-profile as a director since his 1999 historical movie, The Messenger: The Story of Joan of Arc, flopped in theaters. But with Lucy, his new science-fiction shoot-‘em-up starring Scarlett Johansson, Besson delivers an invigorating short, sharp, shock that gleefully references everything from 2001: A Space Odyssey to Akira and The Matrix. It’s pure pulp and ridiculous, but it’s also a helluva lot of fun and contains another solid performance from Johansson, proving that she is a full-fledged action star at this point and an actress comprised of many layers. With her performances in Under the Skin and now this, 2014 has turned out to be a watershed year for Johansson.

In Lucy, Johansson plays an American party girl in Taiwan who becomes a drug mule and then gets infected with the synthetic drug she’s carrying in her body. Her body and mind rapidly evolve, and Besson aggressively details visually the accelerated process with some fantastic editing schemes and cinematic jazzing about. The action sequences alone are worth every chow-down of popcorn. It’s hokum, but Besson is obviously feeling the creative heat again, and it’s difficult to resist his enthusiasm. Lucy isn’t exactly smart, but it is subversively satisfying. It’s certainly Besson’s best movie since The Fifth Element.