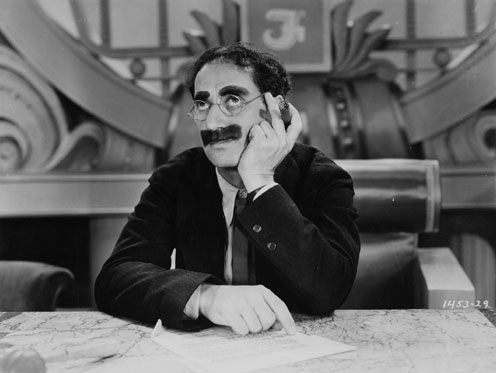 This week, starting Thursday, July 17, the brilliant and anarchic Marx Brothers’ anti-war feature Duck Soup will be shown. If you already love the Marx Brothers, then you know how special this movie is. If you love smart, silly, slapstick comedy but have never seen Duck Soup, then you’re in for a unique afternoon. It’s one of the finest American comedies ever made. The following week, starting July 24, Howard Hawks’ fantastic romantic screwball comedy His Girl Friday will screen, starring Cary Grant and Rosalind Russell. It’s one of the true great movies of its genre and notable for its quick-witted, staccato dialogue that paved the way for movies to come.

That same weekend, the hilarious 1980 comedy Airplane will be shown for two late-night screenings. Also, a series of essential Charlie Chaplin shorts will screen. The rest of the series extending into August will include Preston Sturges’ magnificent The Palm Beach Story, starring Claudette Colbert and Joel McCrea, who also starred in Sturges’ Sullivan’s Travels; Billy Wilder’s The Seven Year Itch, featuring Marilyn Monroe as the object of sexual desire to middle-aged married nincompoop Tom Ewell; the landmark mock-”rockumentary” This is Spinal Tap, one of the funniest movies of all time; and the Disney musical/fantasy Mary Poppins (Dick Van Dyke’s outlandish Cockney accent is worth a few laugh-out-loud moments alone). The series concludes with a showing, in its 50th anniversary year, of the great Beatles movie A Hard Day’s Night, directed by the underrated Richard Lester.