Joe is the Feel-Bad Movie of the Summer 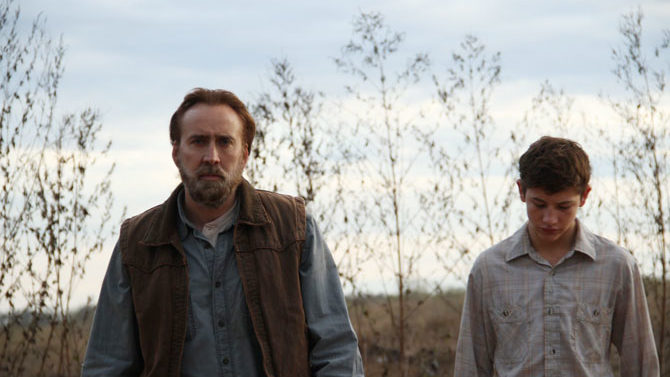 JOE (R) What to do about Nicolas Cage? Brash, impulsive, eccentric, charismatic, ridiculous and daring, Cage has given movie audiences plenty of great performances—Raising Arizona, Vampire’s Kiss, Wild at Heart and Adaptation—and plenty of junk (too many to list here). He won the Academy Award for Best Actor for his role in Leaving Las Vegas, painfully playing a suicidal alcoholic on one last binge in Sin City, but that performance also carried the seeds of the self-conscious, careless and baroque actor that he became for years. In short, Cage ceased to care. But in movies like the unfortunate remake The Wicker Man and Werner Herzog’s fascinating yet misguided The Bad Lieutenant: Port of Call New Orleans, Cage’s eccentricity reached Klaus Kinski hysteria. There was something hypnotic about watching him spin out of control, but the performances could hardly be called great. He was a one-man freak show, seemingly content not to give a shit. To be fair, Marlon Brando did the same thing in the 1960s, before he powerfully delivered the double-whammy of The Godfather and Last Tango in Paris in the early 1970s, but the movie industry is vastly different now, and, to be clear, Cage is no Brando.

But there is greatness in Cage, and his role as the title character in David Gordon Green’s latest—Joe—attests to that. It feels like an artistic resurrection for the actor, akin to Sylvester Stallone’s performance in the gritty 1997 crime movie Cop Land. Stallone ultimately never backed up that role with more great movies, but here’s hoping Cage will. Joe certainly gives Cage a challenging character. Set in rural Texas, the dark and Southern Gothic-esque Joe (written by Gary Hawkins and based on a novel by Larry Brown) focuses on a man with a bad past and a bleak present, who oversees a crew of day laborers poisoning weaker trees in order that stronger trees will take their place. It’s a brutal environment, but one in which these men, like Joe, have learned to struggle and survive. Joe’s sense of fatherly protection magnifies when he hires a teenager, Gary (Tye Sheridan, who starred in the excellent Mud), to work on the crew. Joe’s buried violence rages back when he discovers that Gary’s troubled, alcoholic father (played by Gary Poulter, a non-actor who died after filming this movie) is sadistically beating the boy and the rest of his family. Joe yearns for redemption, but the path to peace comes at a great price.

Joe is a knockout and the feel-bad movie of the summer thus far. Let it burn inside, y’all.