The Immigrant is a Dark, Demanding and Complex Movie 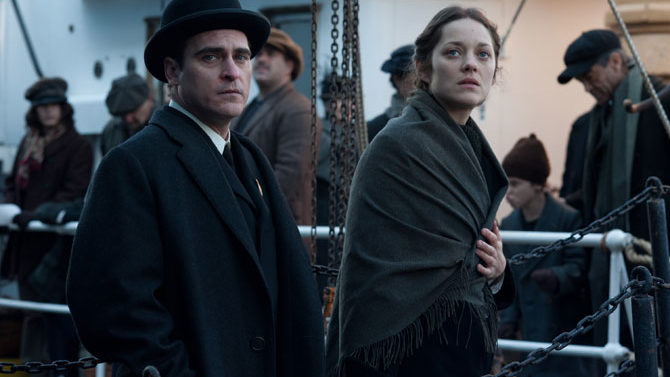 Ewa Cybulska (Marion Cotillard), a Polish immigrant, comes to America with her sickly sister in the early 1920s. Her sister is quarantined at Ellis Island and Ewa is forced to make her way in her new homeland with no money, no prospects and no future. A persuasive stranger, Bruno Weiss (Joaquin Phoenix), offers Ewa work and a place to stay in Manhattan’s Lower East Side. Although scared and suspicious, Ewa accepts the opportunity and eventually finds herself entertaining men and turning tricks with Bruno’s other “doves” in a sleazy saloon/cabaret in order to make enough money to get her sister released from the infirmary. When Ewa’s life bottoms out in lurid dramatic fashion, she finds her possible savior in stage magician Orlando (Jeremy Renner), who’s linked by bloodline to Bruno but who wants to free her from her sad, sordid reality. The American Dream, presented to Ewa in all its seductiveness and brutality, threatens to consume her for good.

Director James Gray’s The Immigrant (written by Gray and the late Ric Menello) premiered at the 2013 Cannes Film Festival and has been sitting on the shelf ever since being picked up by The Weinstein Company for distribution in this country. Why the delay? There’s no logical reason. Yes, The Immigrant is a dark, demanding and complex movie. But it’s also a thematically rich character-driven story and if it had been released in the New Hollywood days of the 1970s, it would be viewed as one of the great American movies of its era.

But The Immigrant has been made now, and by a director whose style is unfashionably earnest, melodramatic (though never sentimental) and straightforward. For those of us who yearn for classical storytelling with nuance and depth, The Immigrant is rich and rewarding. All of the three main performances, particularly Cotillard’s, one of the finest actresses working today, feel lived-in and authentic. There is a sense of bruised grace in her gestures, in her line readings and she exudes the sort of camera-friendly comfort and serenity on screen that silent movie actresses did yesteryear. The Immigrant significantly quotes Federico Fellini’s masterpiece La Strada, as well as Francis Ford Coppola’s The Godfather, Part II, Sergio Leone’s Once Upon a Time in America and Elia Kazan’s America, America, but it never feels like a retread of them. This is a thoroughly original work and one of the finest American movies in decades. It’s shameful that The Immigrant is being dumped into theaters by its distributor at this time for no discernible reason. The Weinsteins will be forgotten long before James Gray’s remarkable movie fades into the past.