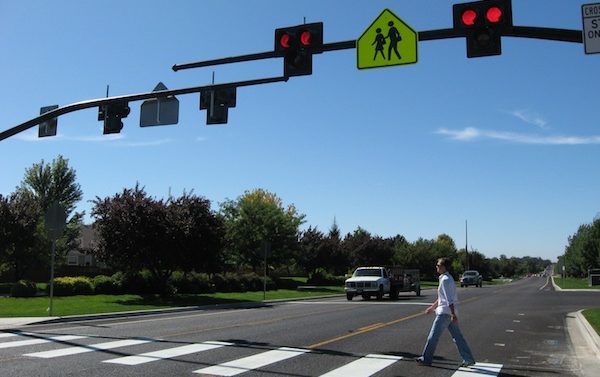 A HAWK signal like this one in Ada County, ID, could help pedestrians cross Prince Avenue.

The Athens-Clarke County Mayor and Commission decided on Tuesday to wait until the state Department of Transportation conducts a safety audit of Prince Avenue in September before making any changes to the street to improve pedestrian safety.

The state audit will cover the state-owned portion of Prince from Milledge Avenue to the bypass and will include recommendations on ways to make the corridor safer for cyclists and pedestrians, such as improved crosswalks and pedestrian refuges.

Local officials will participate in the study, ACC Transportation and Public Works Director David Clark told commissioners at a work session Tuesday. At the same time, Mayor Nancy Denson and commissioners told Clark to prepare short- and long-term recommendations for the local stretch of Prince between Milledge and Pulaski Street. They will consider both at the same time after GDOT submits a report in October or November.

Clark outlined traffic conditions on Prince during the work session. The corridor sees more than its fair share of car crashes, he said, though it’s about middle of the pack in wrecks involving bikes and pedestrians.

In general, speeds are fastest where traffic is lowest and there are the fewest curb cuts—near the UGA Health Sciences campus and Grady Avenue. Otherwise, most traffic is below the 35-mile-per-hour speed limit.

A local group called Complete Streets: Prince Avenue has been pushing for a road diet on the intown part of Prince, narrowing the four-lane road to two travel lanes with a center turn lane and pedestrian islands at mid-block crosswalks like those near The Grit and Piedmont College.

But with 20,000 vehicles a day and more each year, that portion of Prince may not function with only two lanes, ACC traffic engineer Steve Decker said. Other three-lane roads—Milledge, Baxter Street and Lumpkin Street—see between 13,000–18,000 vehicles per day.

Parts of Prince are wide enough for four travel lanes with a median, but not the locally owned part.

According to Clark, options for Prince could include:

• textured crosswalks costing $7,000–$10,000. But Clark said that, while they’re more visible to drivers during the day, they’re harder to see at night and are more of an aesthetic improvement than a safety one.

• moving the crosswalk in front of the Grit to the other side of Newton Street, where it wouldn’t be hidden by utility poles and stopped cars, at a cost of about $10,000.

No cost was given for a road diet.

If commissioners do opt for the road diet, Clark urged them wait until 2018, when Prince is scheduled for repaving, because otherwise the old markings can’t be completely removed.

Behind the Scene: AthFest’s Andy Whitehead