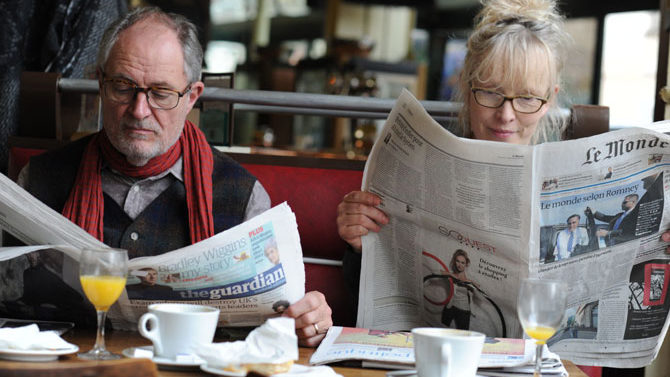 LE WEEK-END (R) What a drag it is getting old. The Rolling Stones sang about it, but they never had to deal with struggling like university professor Nick (Jim Broadbent) and his dissatisfied wife, teacher Meg (Lindsay Duncan). The couple are in their older years and finished with immediate family obligations—their grown son still clings on financially but finally gets the boot once mama and papa land in Paris—but are still attempting to find their place in the world. The City of Light becomes their destination for a chance to rekindle their guttering flame of a marriage. Paris does little to abate the decline, however, and Nick and Meg flounder on. Despite their marital malaise, the couple do exhibit warmth, humor and love for one another. But when Nick and Meg get sidetracked into attending a dinner party hosted by one of Nick’s old academic protégés, played by the deliciously slimy Jeff Goldblum, their marriage burns with a renewed negative vigor. What was initially designed as a joyous weekend has turned into a microscopic examination of everything that is wrong in their relationship. How Nick and Meg peer at it and deal with the consequences becomes the real test.

One of the great opportunities that smaller, independent movies give non-star actors is the environment to shine in leading roles. Broadbent—an exuberant scene-stealer if ever there was one, best known for his work from the movies Brazil, Topsy-Turvy, Moulin Rouge and the television movie Longford—and Duncan, a veteran stage, screen and television actress, both give career-best performances here. And they should, considering that director Roger Michell (Notting Hill; Hyde Park on Hudson) and screenwriter Hanif Kureishi (Venus; My Beautiful Laundrette) have given them ample room to do their thing.

Le Week-End is a sharp and observant comedy/drama about the ever-present tension in a long-term marriage. There are plenty of laughs in the movie, particularly in the scenes of the couple navigating through Paris looking for a place to stay and finding the proper restaurant and in their interactions with the pretentious, superficially charming Goldblum. But what makes the movie resonate on a deeper level is how Broadbent and Duncan exude a familiar intimacy and an air of uncomfortable tension simultaneously. Neither character is viewed without compassion or warmth, even though both of them are exasperating at times. But aren’t we all? Le Week-End is a gem—intelligent, perceptive without being judgmental and quietly wise.