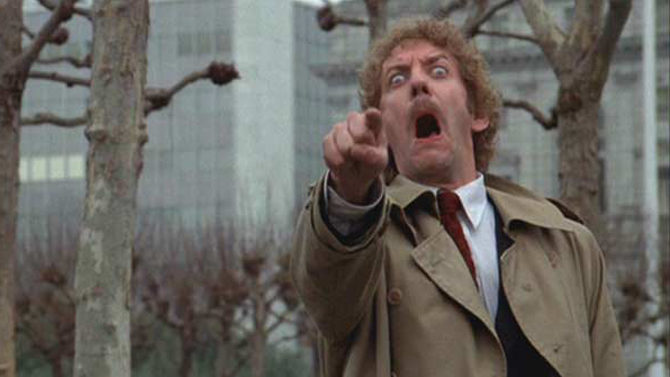 INVASION OF THE BODY SNATCHERS (PG) There’s a common belief that movie remakes are always inferior to the originals. It’s not true. There are numerous examples where the replica gently nudges the first-born aside. John Huston’s The Maltese Falcon (1941), John Carpenter’s The Thing (1982) and the Coen brothers’ True Grit (2010) are all arguably better than their antecedents. Director Phillip Kaufman’s Invasion of the Body Snatchers (1978) is a remake of Don Siegel’s classic science-fiction/horror classic of the same name from 1956 and based on Jack Finney’s 1955 seminal novel. If ever there was a movie to dispel the whole anti-remake argument, this is the one to accomplish it.

Siegel’s tense, dramatically lean and politically loaded version gets the job done. The movie has traditionally been viewed (at least by critics) as a fantasy-fueled examination of McCarthy-era anti-communism. Kaufman’s version heightens the paranoia to a sickly degree, ridding the storyline of a charged political reading and instead infusing it with a darkly satirical evisceration of late-1970s New Age pop psychology, set in that symbolic American cesspool of liberalism and decadence: San Francisco. A city health inspector, Matthew (Donald Sutherland), and his co-worker/friend Elizabeth (Brooke Adams), detect that many of their loved ones and friends are no longer human. The idea is ludicrous and paranoid, but more and more evidence piles up to support it. The residents of the Bay Area have slipped into a nightmare, where alien beings can replicate themselves in their guise and walk among them undetected. The aliens have invaded us from within.

Kaufman’s movie is significantly more terrifying, disturbing and hallucinatory than its solid source. It’s a trip and also delivers a finely acidic streak of humor into the otherwise tense mix. It’s moody, character-driven and reverent of the original movie without being stuffy and dramatically inert. If anything, this feels less like a remake and more like a continuation of the original, a look at how the spread of body-snatching would continue in the age of corroded Aquarius. As with Steven Spielberg’s classic blockbuster Jaws (1975), it’s difficult to believe that Invasion of the Body Snatchers was rated PG. Further proof that the 1970s were indeed more artistically adventurous times when it came to commercial filmmaking.

Invasion of the Body Snatchers will play one time only at Ciné, Saturday, Feb. 1 at 10 p.m., as part of their Science on Screen film series. The screening will be hosted by Professor John J. Mauer, of the UGA College of Veterinary Medicine, who will speak on “Parasites and Mind Control.”