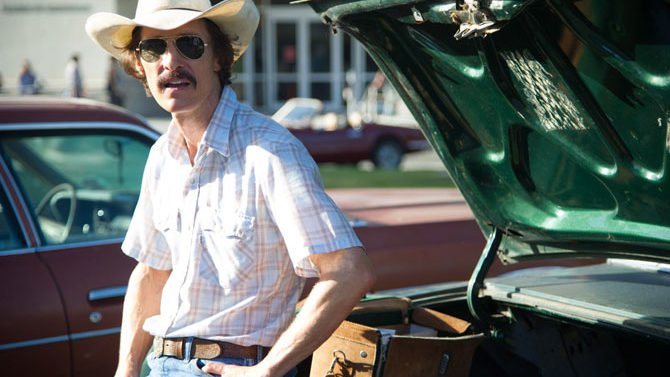 DALLAS BUYERS CLUB (R) There was always something magnetic about actor Matthew McConaughey. In one of his first movies, Richard Linklater’s Dazed and Confused from 1993, he stole every scene he was in with a mixture of easy charisma, country-boy bravado and old-fashioned sex appeal. McConaughey knew how to hustle on the silver screen. He was Paul Newman for Generation X, and his performances felt alive with kinetic possibilities, although they lacked dramatic depth. But movie stars are not necessarily great actors. What makes great movie stars is how they aggressively project their personality onto the audience and how the camera captures their cinematic personality with a ruthless clarity. Sometimes, as with Newman or many others, the balance between actor and movie star is perfected, and we are treated to a rare experience. In some of his early performances, such as Lone Star (directed by John Sayles) and The Newton Boys (directed by Linklater again), McConaughey teased with possibilities. For the most part, however, he was content to wade through the middle of his career on his ability to exude superficial charm. He was lazy. Audiences could care less, though. McConaughey was big box-office, and the Hollywood studios kept him busy throughout the 2000s with a series of lightweight romantic comedies (The Wedding Planner, How to Lose a Guy in 10 Days) and lunk-headed action spectacles (Reign of Fire, Sahara).

Something changed, however, by the time McConaughey starred in the 2011 crime drama The Lincoln Lawyer. He seemed to care again, challenging himself to deliver on all that early promise. Recent movies Bernie, Killer Joe, Magic Mike and Mud all display McConaughey at his best. Dallas Buyers Club, directed by Jean-Marc Vallée and written by Craig Borten and Melisa Wallack, focuses on the real-life story of Texan Ron Woodroof (McConaughey), a virulent homophobe and rodeo rider who was diagnosed with AIDS and given only 30 days to live by his doctors. Woodroof lived past his termination date and began taking the drug AZT to halt the progression of the disease. Discouraged by how the FDA and the medical establishment prevented similar drugs from being prescribed to AIDS-infected patients, Woodroof and his business partner Rayon (Jared Leto), a transsexual also suffering from the disease, sought out alternative avenues to get the much-needed drugs to the people who desperately needed them.